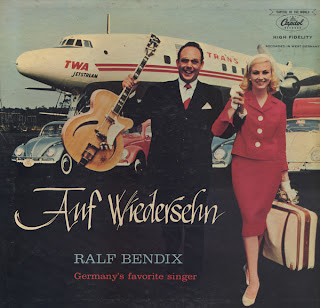 Who would have guessed that I'd stumble across an album from Germany's favorite singer?

From the back cover: Germany's virile, handsome and immensely popular pop singing star, Ralf Bendix, is a story in himself. He ranks as one of the five most popular recording stars in West Germany today, yet his daily job – in the beautiful city of Dusseldorf – is manager of the Dusselfdorf office of Trans World Airlines. Further his real name is Carl H. Schwab.


The cover photo was taken at the Dusseldorf airport and is "courtesy Trans World Airlines".

An interesting side note... In the 60s Bendix got into producing other acts. Among his most successful discoveries, in 1965, was Henio. Henio, amongst U.S. vinyl collectors, is best known for the unusual art found on a number of his record jackets.
Posted by By Mark Betcher at 6:23 AM