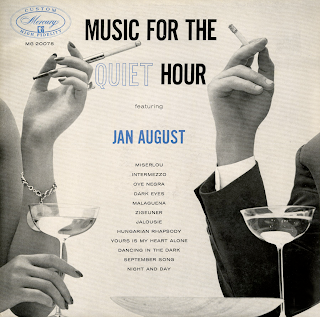 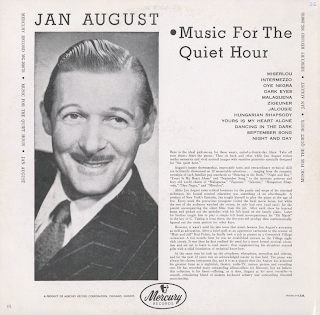 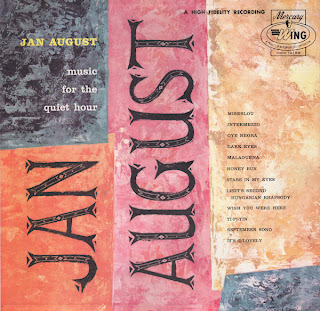 From the back cover: Altho Jan August rates critical hosannas for the purity and scope of his classical technique, his formal musical education was something of an afterthought. A product of New York's Eastside, Jan taught himself to play the piano at the age of five. Every week the precocious youngster visited the local movie houses, but while the rest of the audience watched the screen, he only had eyes (and ears) for the pianist accompanying the silent films from the pit. After each show he hurried home and picked out the melodies with his left hand on the family piano. Later his brother taught him to play a simple left hand accompaniment for "Oh Marie" in the key of C. Taking it from there, the five-year-old prodigy then mathematically figured out the same pattern from other keys.

However, it wasn't until his late teens that music became Jan August's avocation as well as advocation. After a brief spell as an apprentice cartoonist to the creator of "Mutt and Jeff" Bud Fisher, he finally took a job as pianist in a Greenwich Village restaurant. A few months later he was as established success on the Village night club circuit. It was then he first realized his need for a more formal musical education and set out to learn to read music; thus supplementing his abundant natural gifts with a solid foundation of technical know-now.

At the same time he took up the xylophone, vibraphone, accordion and solovox and for the next 12 years as an acknowledged master in that field. The piano was always his chosen instrument tho, and it is as a pianist that Jan August has achieved his greatest fame as a nightclub, theater, radio-TV, motion picture and recording star.