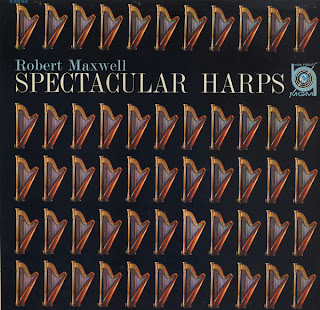 From Billboard - August 8, 1960: MGM Records, as part of its fall program of close to 30 new releases, has included a blockbuster sound "spectacular" series, which is sure to create new fuss and feathers in the growing market for disks with the accent on what has been referred to as the "ultimate" in sound.

Unlike several other companies, which have started separate label identification for their super-sound packages, MGM sticks to its own mother logo, using the "spectacular" tag as a cross identification.

Initial release in this group consists of five all-instrumental sets, each one which is keyed to a specific school of instrumentation. Certainly one of the most colorful of these is the "Spectacular Brass" set and one number alone. "Let Me Entertain You," from Gypsy,' with a flock of swaggering, full-blown brass sounds, is worth almost the price of admission itself. Another interesting set features a colorful harmonica ensemble. Robert Maxwell, harpist extraordinaire, also contributes fine listening via his "Spectacular Harps" album. The group is rounded out with sets featuring accordions and percussion. The latter, tho well made, will find a highly competitive market.

Vet a.&r. man, Eddie Heller, is to be commended for producing the line-up.