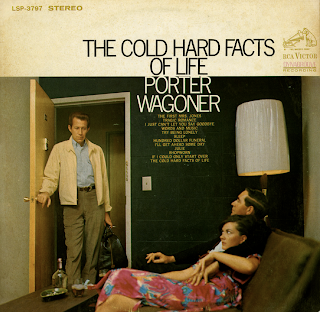 From June 10, 1967: Some cold hard stories in song, led by the hit "The Cold Hard Facts Of Life." Porter Wagoner seems to get better and better. He really packs a wallop in these tunes including "The First Mrs. Jones." Will be one of his biggest albums to date.

The First Mrs. Jones
Words And Music
The Cold Hard Facts Of Life
Sleep
Hundred Dollar Funeral
If I Could Only Start Over
Tragic Romance
Try Being Lonely
I'll Get Ahead Some Day
I Just Can't Let You Say Goodbye
Shopworn
Julie