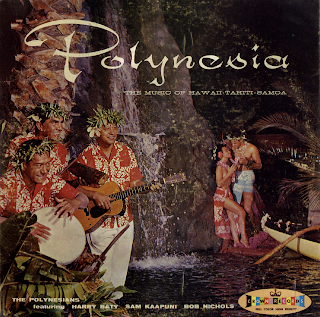 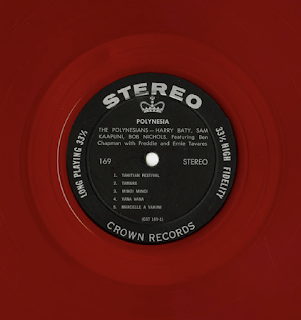 From the back cover: Crown Records wishes to thank the owners of the Polynesian Restaurant (Torrance, California) for their invaluable assistance in making the stunning cover shot available to us.

Also from the back cover: The Polynesians, Harry Baty, Sam Kaapuni and Bob Nichols are of the background to perform perfectly the exotic melodies and rhythms of the Islands.

Harry Baty, leader of the gourd, is of Hawaiian-English ancestry. Today he ranks with such other greats of the Polynesian music field as Alfred Alpaka, Andy Iona and Augie Goupil. Harry Baty has achieved success not only on recordings but in motion pictures as well.

Sam Kaapuni, the arranger and guitarist, is of Hawaiian ancestry. Besides backing such stars as Alfred Alpaka and Dorothy Lamour, he has been a member of the famed Harry Owens Orchestra at the world-renowned Royal Hawaiian Hotel.

Bob Nichols is also of Hawaiian descent. Bob has toured throughout the world with Lani McIntrye.

Ben Chapman (with Freddie and Ernie Tavares), vocal guest artist with The Polynesians, is of Tahitian French and English extraction. He extends a true flavor of the peoples of French Oceania and the Puamota's. A new rising personality who is now being featured in motion pictures and television.

From Billboard - February 1, 1960: Authentic, both from the standpoint of material and performance. Cover is a good one, suitable for display. The instrumentalists are three, and there are guest vocalists who sing in their native languages.