Anthology Of The Twelve String Guitar 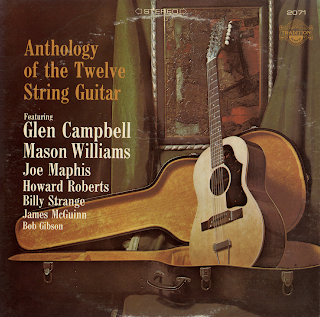 Glen Campbell presents hard driving original melody by Glen Campbell reminiscent of the old hoe-down. Campbell is one of the hottest recording stars today. He brings a delightful "country" feel to the twelve string guitar. He provides a slightly "hot" version of the traditional melody, utilizing several techniques to provide the variations of which the instrument is capable.

Mason Williams is an accomplished Folk performer whose wide background in Folk realms has given him a qualified insight into Folk interpretations. Williams utilizes the perfect intervals, fourths and fifths, providing the usual octave sound of the twelve string guitar rather dissonant speaking quality. He just achieved national popularity by his No. 1 record – "Classical Gas."

Bob Gibson is an accomplished writer, arranger and performer. One of Folk Music's stalwarts, Gibson treats the traditional rhythms of ragtime music with massive chords as moving voices. Minute arabesque melodies are developed into grand theme while the notes change from major to minor with naturalness and fluidity. An excellent example of composing, through acculturation, a piece containing traditional European, Middle Eastern and contemporary American influences.

Howard Roberts is primarily a jazz man. He has several FUNKY albums to his credit. His own composition is a good example of the manner in which the instrument is put to general use today. In one passage he emulates the autoharp with finesse.

Joe Maphis is one of the nation's greatest country guitarists. In this instance Maphis utilizes the Merle Travis style and produces a theme and several variations. He treats the development of style in an almost classical Allegro Sonata (Theme and it's variations and return to theme) form, returning easily to the original theme.

Billy Strange has long been an oustanding guitarist on the West Coast. Is currently featured singer-guitarist on the Tennessee Ernie Ford ABC-TV show. To his original composition he brings the soul and deep feeling of the real "Funk" man. One can almost feel his inner tension as he pursues the phrasing and chordal structure of the piece. He has had many hit albums.