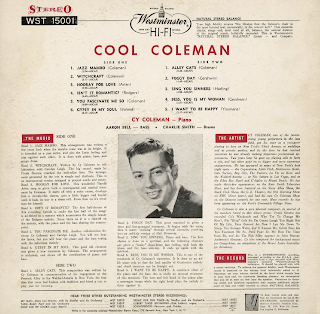 From the back cover: Cy Coleman, one of the fastest rising young performers in the jazz field, got his start as a youngster playing in bars on New York's Third Avenue, at weddings and at private parties, and by the time he had reached seventeen he was already making important professional appearances. Two years later he gave up playing solo to form a trio, and has since gone on to bigger and more numerous engagements. He has appeared at many of New York's best night spots – The Copacabana, Little Club, Shelbourne Hotel, Cafe Society, Bop City, The Embers, La Vie en Rose, and the Waldorf-Astoria – at The Sahara in Las Vegas, and at Eden Roc Hotel and L'Aiglon in Miami Beach. He has made thirty-five appearances on the Kate Smith Television Hour, and has been featured on the Steve Allen Show, the Stork Club Show, the G.E. Theatre, the first Morning Show on NBC (three years), and had his own Cy Coleman Show on the Dumont Network for one year. Most recently he has been appearing on Art Ford's Greenwich Village Show.

Cy Coleman is also a very talented composer, as several of his numbers heard in this album prove. Frank Sinatra has recorded Cy's Witchcraft and Why Try To Change Me Now?, Nat "King" Cole his I'm Gonna Laugh You Right Out Of My Life, Tony Bennett his Now I Lay Me Down To Sleep, The Autumn Waltz and It Amazes Me, Sylvia Sims his You Fascinate Me So, Patti Page his My How The Time Goes By, and his Tin Pan Alley appears in John Murray Anderson's Almanac. Cy also composed the background music for Compulsion, an adaptation of the Meyer Levin best-seller for Broadway.

From Billboard - October 13, 1958: Pianist Coleman plays a light, melodic brand of jazz-flavored piano, ably backed by bass and drums. Selections include Coleman's own tune, "Witchcraft," along with "Isn't It Romantic," "Gypsy In My Soul," and other standards. Pleasant mood package for jocks and well-produced item for stereo fans

Jazz Mambo
Witchcraft
Hooray For Love
Isn't It Romantic
You Fascinate Me So
Gypsy In My Soul
Alley Cats
Foggy Day
Sing You Sinners
Bess, You Is My Woman
I Want To Be Happy