Thinking Of You - Andre Previn 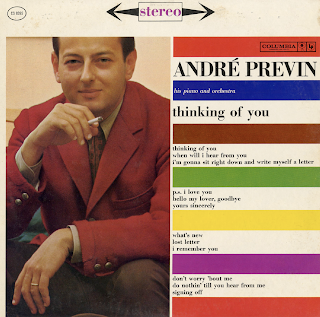 I might as well tell you at the outset that on the subject of Andre Previn, I am not an impartial observer. I have been observing I'm at close quarters for a good many years now, under all sorts of circumstances and in all kinds of roles, and from the beginning of our friendship, I have been what you call a partial observer. Unlike Will Rodgers, I have met a lot of men I didn't like – but Andre isn't one of them.

For the moment, let's forget the fact that he was born in Berlin in 1929, arrived in this country 10 years later (already an accomplished pianist), played with dance bands, graduated to soloist, developed into a wickedly talented movie composer and arranger, appears with first-line symphony orchestras, won two Academy Awards, swings in the best smoke-filled jazz spots – and, at 31, has only realized a smidgin of his colossal potential. No, let's not go through all that. You already know it by heart. It's one of the authentic musical legends of our time.

Let's talk for a moment about Andre Previn, the man, In the first place, he's a delightful conversationalist – witty, perceptive, original. You won't be surprised, if you've listened to only four bars of Previn, to know, he's a man of exquisite tastes. One small example: his growing collection of American paintings is well on the way to becoming one of the finest private holdings in the land. He's an insatiable reader. My job as a columnist requires me to read continually, but Andre has not only read every book I've read, he's read books I'll never get around to reading, plus books I never heard of, and to make it worse, he can quote long passages from most of them. Most important – and this is getting to be a quality almost unique among jazz pianists – he has humor. He can laugh at himself, and at the solemn pretensions of those who would take all the bounding, boundless joy out of jazz. He is, in short, the most eclectic of all the musicians I've met. The only reason I will now go on and call him the leader of the eclectics or, General Eclectic – is that he is as addicted to monstrous puns as I, Previn knows. Add to this the fact that he is married to an attractive, intelligent and talented girl named Dory Laugdon – she collaborated with him on When Will I Hear From You, one of the songs in this album – and you will understand why I am happy to tell you that Andre Previn is a lousy tennis player. He is not perfect.

I frist met Andre in 1950, during the Korean War, and there will be no puns at this point about "Body And Seoul" or "My Little Yalu Basket," At this time, I was in the morose habit of hanging around a tacky Market Street jazz spot called Fack's, drinking down my disappointment at not having been summoned to active duty by a grateful nation that had found me indispensable during World War II.

Well, I was standing at the bar there one night, choking on my own bitterness, when in walked this young soldier from the Presidio. I hated him on sight. Here he was, a defender, whereas I, who had been in the first wave to hit Omaha Beach in Nebraska, had been deemed too old, too soft. Also shy and nervous. Approaching the saloon's owners, George Andros, he asked diffidently: "Okay if I play the piano a little?" "Go ahead, kid," said Andros. I swung around to watch, sourly, as the soldier sat down. His hands, I noted, were short and stubby; at least he wouldn't play octaves in the manner of Carmen Cavallaro. But then he underwent a remarkable metamorphosis. The slouchy posture over the keyboard became a powerful crouch. The pudgy hands turned into steel traps. I could swear smoke came out of his ears as he suddenly pulled himself together and swooped down the keyboard with all the authority and confidence of pure talent. as a marvelous flood of notes, clear and sparkling as diamonds, swirled through the fetid air, I whisper to George: "Who's THAT?"

"Don't you know?" he answered, looking down his nose as though I had asked for a drink from Beethoven's Fifth, "That's Andre Previn. You never heard of him?"

Yes, I had heard of him, and now at last I was hearing him – the enfant incroyable who, though barely out of his teens, had already become the most hotly-discussed new pianist in a field overcrowded with formidable practitioners. To his detractors, and there were several, undoubtedly worried, he was "nothing more than a clever cocktail pianist." To his supporters, and there were many (and how they grew!), he was the most refreshing young gale to come blowing down the stale halls of jazz in years.

I think Andre, being intelligent, was aware of his critics, and he set about to prove them wrong with a vengeance. Year by year, he has expanded his style and range and repertoire until, from the standpoint of technique and imagination, he is the very definition of what cocktail piano isn't. His classical training and interest has stood him in good stead: unlike too many of his contemporaries, he knows the value of dynamics and shading. And his facility continues to be awesome. Today, there is hardly a jazz pianist around who doesn't suspect, secretly, that he has found a way to play the cracks.

To use perhaps the most overworked word in the lexicon, I think you'll like the sound of this album, the latest in the long string of Previn successes. It is the sound of quality – the sounds of Andre Previn. – Herb Caen, San Francisco Chronicle

Thinking Of You
When Will I Hear From You
I'm Gonna Sit Right Down And Write Myself A Letter
P.S. I Love You
Hello My Lover, Goodbye
Yours Sincerely
What's New
Lost Letter
I Remember You
Don't Worry "Bout Me
Do Nothin' Till You Hear From Me
Signing Off
Posted by By Mark Betcher at 6:41 PM