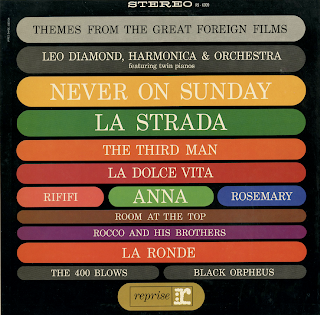 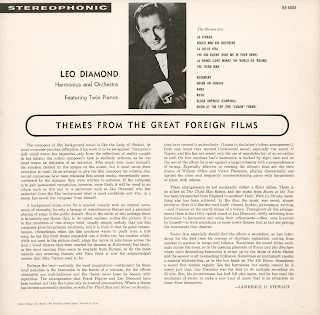 From the back cover: The arrangements that Frank Hunter and Leo Diamond have here worked out take the tunes only as musical provocations. Where a theme has become universally familiar, as with The Third Man and Never On Sunday they have treated it unfamiliarly. (Listen to the latter's bolero arrangement.) Both men insist they wanted Continental sound, especially the sound of Naples, and this has not meant only the use of mandolins but of an accordion as well. On four numbers Leo's harmonica is backed by eight men and on the rest of the album he is set against a large orchestra with a preponderance of strings. Especially effective in creating the album's tone are the twin pianos of William Miller and Victor Piemonte, playing dramatically one against the other and frequently counterbalancing piano with harpsichord or piano with celesta.

La Strada
Rocco And His Brothers
La Dolce Vita
The 400 Blows (Hide Me In Your Arms)
La Ronde (Love Makes The World Go 'Round)
The Third Man
Rosemary
Never On Sunday
Anna
Rififi
Black Orpheus (Carnival)
Room At The Top (The "Susan" Theme)
Posted by By Mark Betcher at 6:11 PM