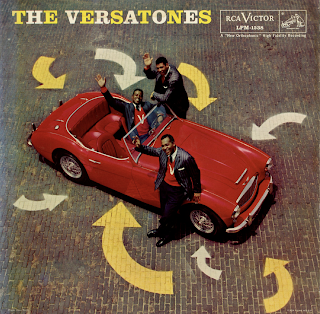 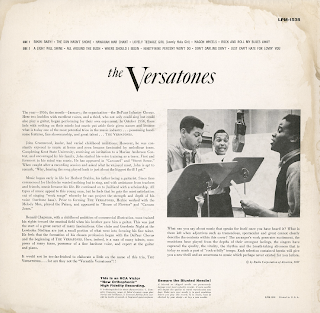 From the back cover: The year – 1956; the month – January; the organization – the DePaur Infantry Chorus. Here two buddies with excellent singing voices, and a third, who not only could sing but could also play guitar, began performing for their own enjoyment. In October 1956, these lads with nothing on their minds but music put aside their given names and became what is today one of the most potential trios in the music industry... possessing handsome features, fine showmanship, and great talent... The Versatones.

John Greenwood, leader, had varied childhood ambitions. However, he was constantly exposed to music at home and soon became fascinated by melodious tones. Completing Kent State University, receiving an invitation to a Marian Anderson Contest, and encouraged by his family by his family, John started his voice training as a tenor. First and foremost in his mind was music. He has appeared in "Carousel" and "Street Scene." When caught after a recording session and asked what he enjoyed most, John is apt to remark, "Why, hearing the song played back is just about the biggest thrill I get."

Music began early in life for Herbert Stubbs, his father being a guitarist. Since time commenced for Herbie he wanted nothing but to sing, and with assistance from teachers and friends, music became his life. He continued on to Juilliard with a scholarship. All types of music, appeal to this young man, but he feels that he gets the most satisfaction out of singing "work songs" whereby he can project the strength and depth of his voice (baritone bass). Prior to forming The Versatones, Herbie worked with the Melody Men, played the Palace, and appeared in "House of Flowers" and "Carmen Jones."

Ronald Chapman, with a childhood ambition of commercial illustration, soon trained his sights toward the musical field when his brother gave him a guitar. This was just the start of a great career of many fascinations. Glee Clubs and Gershwin Night at the Lewisohn Stadium are just a small portion of what went into forming his fine talent. He feels that the formation of his chosen profession began with the DePaur Chorus and the beginning of The Versatones. Here, indeed, is a man of many talents, composer of many tunes, processor of a fine baritone voice, and expert at the guitar and piano.

Bikini Baby!
The Sun Hasn't Shone
Hawaiian War Chant
Lovel Teenage Girl (Lovely Hula Girl)
Wagon Wheels
Rock And Roll My Blues Away
A Light Will Shine
All Around The Bush
Where Should I Begin
Ninety-Nine Percent Won't Do
Don't Darling Don't
Just Can't Hate For Lovin' You
Posted by By Mark Betcher at 7:19 PM