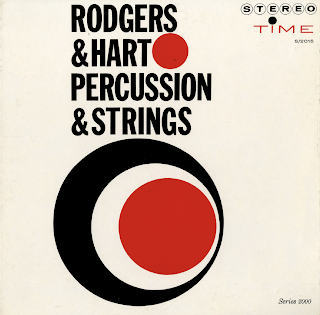 From the inside cover: Siravo was born (and still lives) in Staten Island, New York. There were no musicians in his family: "I was the only one who got off on the wrong track," he observes. Studying saxophone, clarinet and flute, he made his professional debut very early. He played in, and helped to organize, the original Glenn Miller orchestra in 1937.

For several years Siravo lived on the West Coast, brightening the studio scene for Ray Heindorf of Warner Brothers, Johnny Green of MGM and others for whom he orchestrated diligently. His experience as a background writer for vocalists has also been extensive; two of his best known associates are Frank Sinatra and Doris Day.

For the present album George employed an orchestra that included some twenty violins on the right channel; four violas, four celli, four trombones (and on some tracks one French horn) on the left; a regular four-piece rhythm section (piano, bass, guitar and drums) stretched across the landscape, plus two additional percussion men, one on each channel; a harpist, and, on one track only, an accordion.

From Billboard - October 17, 1960: Another of an interesting number of recordings where the emphasis lies principally in sound, with the song material merely a device for showing off the sound. In this disking, a tremendous compliment of strings (29 violins, 5 violas and 5 celli) were used against French Horn, trombones, guitar, accordion, harp, bass and a large assortment of percussion and drums. The sound is topnotch with the only possible drawback being an overemphasis on percussion on the kind of melodic material that doesn't require that kind of treatment. Fine tunes include "Blue Moon," "Spring Is Here," "Funny Valentine," etc.

Where Or When
My Funny Valentine
Blue Moon
Bewitched
Falling In Love With Love
I Married An Angel
Spring Is Here
The Most Beautiful Girl In The World
The Lady Is A Tramp
You Are Too Beautiful
I Didn't Know What Time It Was
My Heart Stood Still
Posted by By Mark Betcher at 6:01 PM