The Best Of Burt Bacharach & Hal David - The Wilders 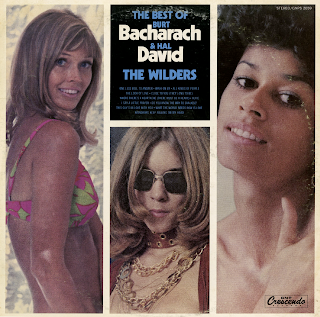 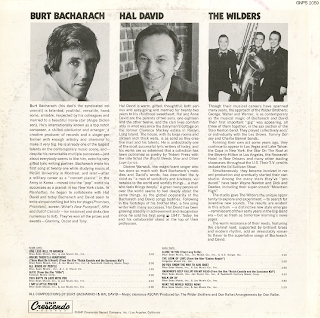 From the back cover: Though their musical careers have spanned many years, the approach of the Wilder Brothers; George, Walter and Warner, is as contemporary as the musical magic of Bacharach and David. Their first important "gig" was appearing, all three of them together, in the sax section of the Stan Kenton band. They played collectively and or individually with the Les Brown, Tommy Dorsey and Charlie Barnet bands.

Forming their own act some years ago, they continue to appear in Las Vegas and Lake Tahoe; the Copa in New York, the Star On The Roof at the Beverly-Hilton in Los Angeles, the Roosevelt Hotel in New Orleans and many other leading showcases throughout the U.S. Their TV credits include the Ed Sullivan Show.

Simultaneously they became involved in record production and eventually started their own studio. Among the many stars they've "produced" have been Wayne Newton and Dick and Deedee, including their super-smash "Mountain-High."

The studio gave The Wilders the unique opportunity to explore and experiment – to search for inventive new sounds. The results are evident in this album – a distinctive new style emerges – reminiscent of their early years in the Big Band ear – but as fresh as tomorrow morning's newspaper.

The warm and resonance of their reeds, featuring the clarinet lead, supported by brilliant brass and modern rhythm, add an irresistibly romantic flavor to the superlative songs of Bacharach and David.

One Less Bell To Answer
Where There's A Heartache
All Kinds Of People
Alfie (From the film "Alfie")
This Guy's In Love With You
I Say A Little Prayer
Close To You
The Look Of Love (From the film "Casino Royale")
Do You Know The Way To San Jose?
Raindrops Keep Fallin' On My Head (From the film "Butch Cassidy and the Sundance Kid")
Walk On By
What The World Needs Now
Posted by By Mark Betcher at 5:42 PM