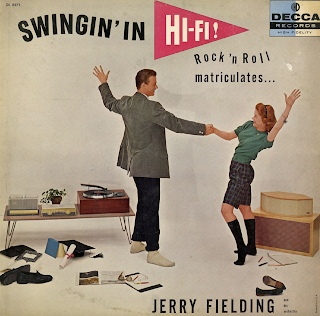 From the back cover: One of the most sensitive and modest day bandsmen, Jerry Fielding, was born a little more than thirty years ago – June 17, 1923, to be exact – in Pittsburgh, Pennsylvania. He began as a performer on the saxophone and clarinet, but at seventeen he was already writing arrangements, and it was not long before he developed into one of the most expert arrangers in the field. He worked as arranger for some of the greatest men in the country, including Tommy Dorsey, Charlie Barnet, Jimmy Lunceford, as well as for many top radio and TV shows, including the Groucho Marx show, the Mickey Rooney show, and his own Jerry Fielding show.

In 1952 Jerry formed his own dance band to provide, he says, "some relief from the shackles of the requirements of the commercial media." It met with instant acceptance. He band was staffed with top men, all seeking release from the nervous tension of their commercial work. The tours of the Jerry Fielding orchestra have been unreservedly successful, perhaps because Jerry thinks of his band as a unit. He refuses to divide credit in two parts – the band and the leader – believing that one is reflective and even useless without the other.