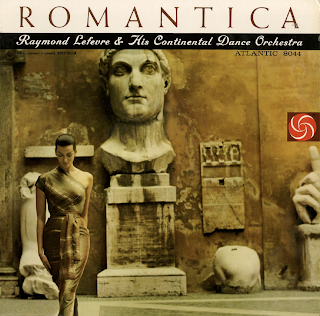 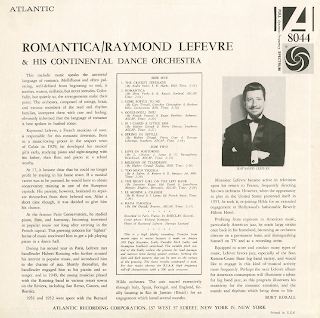 From the back cover: Raymond Lefevre, a French musician of taste, is responsible for this romantic diversion. Born to a music-loving grocer in the seaport town of Calais in 1929, he developed his musical gifts early, studying piano and sight-singing with his father, then flute and piano at a school nearby.

At 17, it became clear that he would no longer profit by staying in his home town. If a musical career was to be pursued, he would have to obtain conservatory training in one of the European capitals. His parents, however, hesitated to separate themselves from their beloved son. After a short time though, it was decided to give him his chance.

At the famous Paris Conservatoire, he studied piano, flute, and harmony, becoming interested in popular music not long after arriving in the French capital. This growing concern for "lighter" forms of music motivated him to get a job playing piano in a dance hall.

During his second year in Paris, Lefevre met bandleader Hubert Rostaing who further aroused his interest in popular music, and introduced him to the charms of jazz. Shortly thereafter, the bandleader engaged him as his pianist and arranger, and in 1949, the young musician played with the Rostaing band in various resort towns on the Riviera, including San Remo, Cannes and Biarritz.

1951 and 1952 were spent with the Bernard Hilda orchestra. The unit toured extensively through Italy, Spain, Portugal and England, finally locating in Rio de Janeiro (Brazil) for an engagement which lasted several months.

Monsieur Lefevre became active in television upon his return to France, frequently directing his own orchestra. However, when the opportunity to play in the United States presented itself in 1955, he took it, re-joining Hilda for an extended engagement at Hollywood's fashionable Beverly Hilton Hotel.

Profiting from exposure to American music, particularly American Jazz, he made large strides once back in his homeland, becoming an orchestra director on a permanent basis, and distinguishing himself on TV and as a recording artist.

Equipped to score and conduct many types of music, Lefevre favors jazz, especially of the Stan Kenton-Count Basie big band variety, and would like to engage in this kind of musical activity more frequently. Perhaps the next Lefevre album for American consumption will illuminate a talent for big band jazz, as this program illustrates his sensitivity for the romantic emotions, and the sounds and rhythms which bring them to life. – Burt Korall

The Cricket Serenade
Romantica
Come Softly To Me
Gouli-Gouli Dou
If I Cared A Little Less
Spring In Seville
Love In Portofino
Millions Of Teardrops
Too Much Tequila
The Right Girl On The Left Bank
Le Monde A Change
Hava Naguila
Posted by By Mark Betcher at 5:43 PM