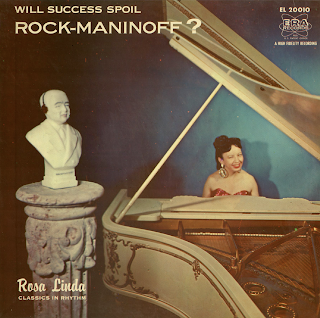 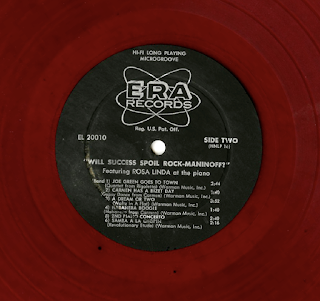 From the back cover: Rosa Linda was born in Chicago and studied piano from the age of three. When she was six years of age she made her debut with the Chicago Symphony Orchestra. She created such a sensation that she was immediately booked to appear with the Detroit, Oklahoma and New York Symphonies.

She toured Europe as a child prodigy and studied with the late and great Moritz Rosenthal. When Igor Stravinsky wrote his Piano Concerto he engaged Rosa Linda for the world premiere which took place in Budapest with the Budapest Symphony Orchestra under the baton of the composer.

Returning to this country she was picked by NBC to appear in a series of concerts with the NBC Symphony Orchestra.

Later she toured this country with Paul Whiteman introducing such famous works as the Gershwin Cuban Overture, the Warsaw Concerto, etc.

A few years ago she felt the urge to develop her present style which turned out to be a very lucrative field for her talents. – Sam Rosen and Ted Dale

From Billboard - February 9, 1957: In attempting to kid the classics, pianist Rosa Linda will most assuredly be the butt of her own humor. There's little to recommend this album other than the title, and even this will be repugnant to many. Music is of the background family, and best be appreciated with the volume down low – very low.