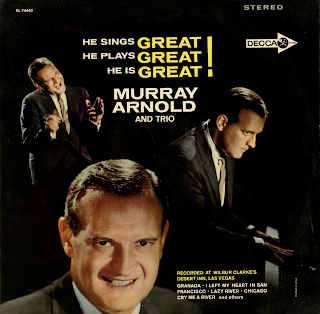 From the back cover: The Murray Arnold talents won early applause. He was playing the piano in vaudeville when barely ten, and soon after was demonstrating a surprisingly well-developed baritone while billed alongside the likes of Gus Kahn.

Right before World War II, the Arnold career got a big break when he was signed on as pianist for the Skinnay Ennis orchestra, and did a national tour for the Bob Hope Show.

After leaving the service, Murray joined the Freddy Martin Band, and for six years was featured pianist and vocalist. On his own ever since, Murray Arnold and Trio have won steadily increasing popularity via appearance in top clubs.

Granada
My Kind Of Girl
I Wanna Be Around
Alley Cat
I Left My Heart In San Francisco
Lazy River
The Look Of Love
Mack The Knife
I'm A Fool To Want You
At Long Last Love
Cry Me A River
Posted by By Mark Betcher at 8:23 PM