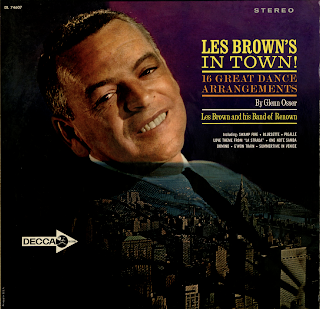 From the back cover: In the fall of 1937, after my first dance orchestra "The Duke Blue Devils" disbanded, I took a shot at freelance arranging in New York – and had the good fortune to share an apartment on 58th Street with Glenn Osser – also a freelance arranger. Although I had a good foundation of music from my studies at Ithaca Conservatory Of Music and Duke University, I have always maintained that my post-graduate work was done by looking over Glenn's shoulder at the scores he wrote for Charlie Barnett, Bob Crosby, Benny Goodman, Paul Whiteman, Al Goodman, At Roth, etc. Glenn taught me more than any single individual in my musical career. Two thousand scores later, he's still among the very top of America's arranging fraternity.

When approached to record an album of published arrangements by Osser, I did not favor the idea at all, insomuch as all of my recorded arrangements in the past have been tailor-made for my particular personnel. But after hearing these published arrangements at one of our rehearsals, I changed my mind and this album is the result. Here is superior arranging, by a superior musician – one whom I'm happy to count as a life-long friend. – Les Brown

From Billboard - February 6, 1965: The swingin' Band of Renown in a package of fresh, big band arrangements by Glenn Osser. The 17-piece band maintains its clean sound. Some top solo work by Faerquist, Newman, Clarkson and Morales. The opener "Swamp Fire," sets the pace for this album of 16 greats. First-rate arrangements and sound.