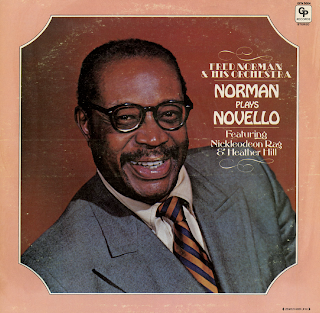 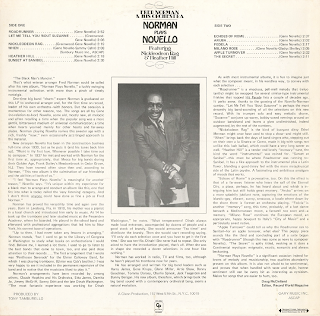 From the back cover: "The Black Man's Mancini."

That's what veteran arranger Fred Norman could be called after his new album, "Norman Plays Novello," a lushly swinging instrumental collection with more than a pinch of timely nostalgia.

One-time big band "charts" expert Norman is graduated on this LP to orchestral arranger and, for the first time on record, leader of his own orchestra – with honors. But the occasion is momentous for other reasons, too. The songs are all by Gene (no-relation-to-Ivor) Novello, some old, mostly new, all melodic and often recalling a time when the popular song was a more gentle, bittersweet medium of universal communication; a time when hearts yearned mainly for other hearts and far-away places. Norman playing Novello revives this sweeter age with a rich, freshly "now," even occasionally jazz-tinged approach to the material.

New Jerseyan Novello has been in the construction business full-time since 1930, but as he puts it (and his tunes back him up), "Music is my first love. Whenever possible I take time out to compose." In 1937 he met and worked with Norman for the first time at, appropriately, that Mecca for big bands during their Golden Age, Frank Dailey's Meadowbrook in Cedar Grove, N.J. They have teamed often since then and, according to Norman, "This new album is the culmination of our friendship and the abilities of both of us.

"I feel 'Norman Plays Novello' is meaningful for another reason," Novello says. "It's unique within my experiences for a black man to arrange and conduct an album like this, one that fits into what is today called the 'easy listening' category. And I don't think anyone could have done as fine a job as Fred Norman.

Norman has proved his versatility time and again over the years. Born in Leesburg, Fla. in 1910, his mother was a pianist in a local church and introduced him early to music. At 14 he took up the trombone and later studied music at the Fessenden Academy, where he boarded. He played in the school band and afterward with professional aggregations that led hi to New York, his current base of operations.

"Up to then, I had never taken any lessons in arranging." Norman reveals, "but I used to go to the Library of Congress in Washington to study what books on orchestrations I could find. Believe me, I learned a lot there. I used to go to listen to the best bands that came to town, too, and also paid close attention to their records... The first arrangement that I wrote was "Penthouse Serenade" for the Elmer Calloway Band, for which I was playing trombone. (Elmer was Cab's brother.) I was very happy to see it included in the permanent repertoire of the band and to notice that the musicians liked to play it."

Norman's arrangements have been recorded by, among others, Claude Hopkins and His Orchestra, Etta James, Damita Jo, Jimmy McGriff, Sonny Stitt and the late Dinah Washington. "The most fantastic experience was working for Dinah Washington," he notes. "What temperament! Dinah always made loud entrances, accompanied by dozens of people and a good stock of brandy. She would announce 'Tea Time!' and distribute the brandy. Then she would start recording saying, 'I'll only do each selection once and you have to get it the first time.' She was terrific. Dinah! She never had to repeat. She only asked to have the introduction played, that's all. When she 2as in shape she recorded a dozen selections in one hour like nothing."

Norman has worked in radio, TV and films, too, although he hasn't played his trombone now for years.