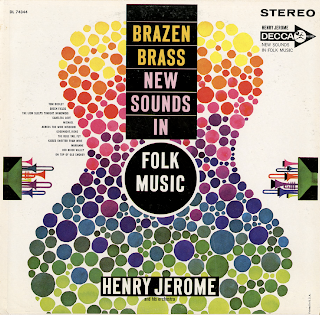 From Billboard - November 24, 1962: Having given the "Brazen Brass" treatment to Hollywood tunes, Latin favorites, and the big-band oldies, Henry Jerome travels the Ray Charles route, and applies the arrangement technique to a nice collection of international folk favorites. Tunes include "Tom Dooley," the South African "Wimoweh." "Blue Tail Fly," "Red River Valley," among others. The sound is big, bright and brassy, and Jerome fans and deejays will like it.