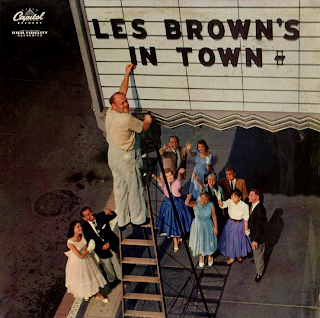 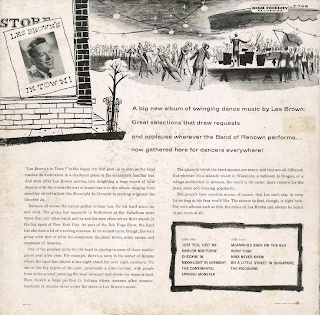 From the back cover: Dancers all across the nation gather to hear Les, for his band tours far and wide. The group has appeared in Hollywood at the Palladium more times than any other band, and he had his men often set up their stands in the tops spots of New York City. As part of the Bob Hope Show, the band has also done a lot of traveling overseas. In its annual tours, though, Brown's group aims first of all at the crossroads, the small towns, army camps, and campuses of America.

One of the greatest kicks for the band is playing in some of these smaller places year after year. For example, there's a town in the center of Kansas where the band has played a one-night stand for over eight summers. It's one of the big nights of the year, partially a town holiday, with people from miles around jamming the local veteran's hall where the dance is held. Then there's a large pavilion in Indiana where, summer after summer, hundreds of couples dance under the stars to Les Brown's music.

The places in which the band appears are many, and they are all different. But whether it's a lakeside resort in Wisconsin, a ballroom in Oregon, or a college auditorium in Arizona, the result is the same: more renown for the band, more poll-winning popularity.

Just You, Just Me
Harlem Nocturne
Checkin' In
Moonlight In Vermont
The Continental
Spanish Monster
Meanwhile Back On The Bus
Ridin' High
Nina Never Knew
On A Little Street In Singapore
The Piccolino
Posted by By Mark Betcher at 6:18 PM