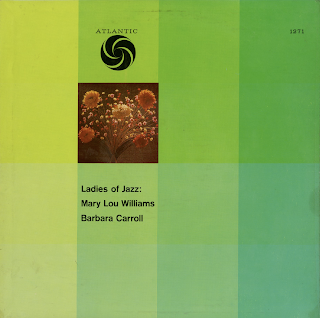 From the back cover: Since it has long been the conviction of this writer that a woman's place is in the groove, the back-to-back flower arrangement that brings two of the jazz world's greatest feminine talents in juxtaposition on one economy-size LP seems to me a move as desirable as it is decorative.

The status of girl instrumentalists in jazz has been the subject of intermittent debates for two or three decades. Inevitably the girl musician is faced both with the advantage of being a novelty and with the handicap of curiosity value, an element that sometimes drive her, against her will, into the synthetic surroundings of an all-girl combo or band. Thus the prospect of taking up music as a career confronts her with conflicting prejudices. As Barry Ulanov observed in a recent issue of Down Beat (Jan. 9, 1958): 'That women can be suffered to play any instrument in highly demanding, unmistakable discriminating male company has been proved many times now... How strange it is, really, that jazz should be so long in accepting women as instrumentalists, and equally curious that women should have taken so long to demand a sizable place for themselves in jazz. It may be that jazz musicians are more conservative than they – or we – usually think."

My belief that Ulanov is right has its foundation in several personal experiences involving endeavors to secure recognition and employment for some of these musicians. Barbara Carroll is an important case in point. Born Jan. 25, 1925 in Worcester, Mass., with a background of studies at New England Conservatory and a U.S.O. tour with the inevitable all-girl trio, she arrived in New York in 1947 and began to gig along the then jumping 52nd street scene. To musicians willing to look beyond visual values it was immediately apparent that Miss Carroll was the first musician of her sex to execute, with complete confidence and uncommon competence, the type of jazz then known as bebop. To many, though, the concept of a girl playing bop piano was strictly a novelty' for almost two years she remained perched on this precarious level of semi-acceptance.

In March, 1949 I managed to finagle her recording debut as a sidewoman (if that is the word) of two sessions for obscure labels; one date was led by the late Serge Chaloff, the other by Eddie She. It was evident then, as it is today, that the sound of Bud Powell had not escaped Miss Carroll's ears. Little by little, as her style began to formulate itself more firmly and her personality made its charming impact on audiences around Manhattan, Barbara began to widen her following. By 1952, when she first played at the Embers, she had shaken off the "not-bad-for-a-girl" stigma forever. The trio heard with her at the once-hip East Side bistro was the same group featured on the Broadway stage in 1953 in Me And Juliet and heard on Side One of this record. The sympathetic vibrations between Barbara and her bassist were both musical and personal; in September, 1954, she became Mrs. Joe Shulman, cementing a partnership that was broken tragically by Shulman's death in August 1957.

The seven tracks on Barbara's side of this LP reflect, both in matter and in manner, the environment in which she matured musically and the setting in which she ultimately met her greatest success. The manner is that of the modern jazz soloist, drawing inspiration from Powell but adding to it a touch that is in no way stigmatized by being termed distinctly feminine. The matter, as the titles show, is the vast cornucopia of show tunes and songs the have earned their widest popularity, at least in New York, in the area east of Fifth Avenue, where the audiences are sophisticated enough to dig My Funny Valentine and Autumn In New York for the great tunes they are, but probably too sophisticated ever to have heard of Bud Powell. Miss Carroll caters to their taste with preeminent grace, striking a beautiful balance between the impact of her first influences and the requirements of her later settings.

The relationship of Mary Lou Williams to jazz history goes back longer than Barbara's and has it roots in an early and honorable phase when Kansas City jazz was a living, fire-breathing entity. If Mary Lou's is a name less familiar to some present day jazz followers than that of her vis-d-vis on these sides, it will be because she has only recently emerged from a period of retirement and meditation that may well be unique in jazz.

A native Pittsburgher, Mary spent the 1930s as pianist and arranger with the Andy Kirk orchestra, mainly in and around Kansas City. Throughout most of this time she was virtually the only internationally prominent female jazz instrumentalist. During the 1940s she was heard with her own trio or combo around New York. Though she was among the fist musicians of the older generation to appreciate the newer developments in jazz (Thelonious Monk and Bud Powell were among her closest friends and disciples), the caprices of time and fashion seemed to have left her in limbo by the end of 1952. Without honor in her own country but still remembered by record fans overseas, she spent all of 1953 in England, and the following year in France.

It was during a night club engagement in Paris that Mary made her decision. Too many years of one-nighter tours, crazy hours and rotten liquor, too many signs around her of sickening lust for fame and material wealth, convinced her that the time had come to quit: "Life looked mean and ugly to me, music bored and irritated me – I was unhappy and fed up with everything," she told a reporter for Hue Magazine. And then began the period that kept Mary Lou Williams from the public eye for almost three years. Helped in her decision by her old friend, pianist-singer Hazel Scott, she turned to prayer and meditation; convinced that the world was headed catastrophe, she set out to prepare her friends for it by writing and talking to them. Back in New York in December 1954, she set out to make her home a haven for musicians who were down on their luck. She prepared herself for acceptance into the Catholic faith and in May, 1957, along with Lorraine (Mrs. Dizzy) Gillespie, was baptized at St. Ignatius Church.

After almost two years out of work, two years in which every waking moment has been devoted to helping others, Mary found herself heavily and seriously in debt. Providentially, a Redemptionist priest, Father John Crowley, who had once played saxophone, convinced her that God had given her a great gift that should not too unused. In July, Mary Lou Williams, just past her 47th birthday, and held in saintly awe by the hundreds she had befriended during her self-imposed exile from the world of jazz, returned at last, as a participant in the American Jazz Festival at Newport Rhode Island.

Mary today has found renewed faith in life, in music and in herself. Once again she has blessed night club audiences with her superlative blend of traditional and modern jazz influences; her trio is in demand and her future, perhaps for the very first time in her long and torturous career, seems reasonably secure.

The trio heard with Mary Lou on her side of this disc includes two sidemen who have worked with her off and on since the late 1940s. Bill Clark, the drummer, is best known as a member of the George Shearing quintet from 1953-56.

Like Barbara, Mary has adapted a fundamentally progressive keyboard style to the requirements of the better show tunes: purely by coincidence Richard Rodgers and Cole Porter are represented on both sides of this record. But because she has enjoyed for many years a corollary reputation as a composer and arranger, two Williams originals are included. The first is Opus Z, for which Mary shares credit with another talented young pianist-composer whose work she has encouraged, Herbie Nichols (his other compositions include Lady Sings The Blue). In The Purple Grotto, dedicated to Al "Jazzbo" Collins and named for the record program he ran on WNEW, is a moderato blues.

Throughout her seven performances Mary maintains a gentle, almost stealthy brand of swing, sometimes achieving a Garner-like lag in the beat and always bearing in mind and hand the essential nature of the piano as a vehicle for ambidextrous, ten-fingered expression rather than a mere medium for the single-note solo line exposition.

It is doubtful whether, after hearing these sides, you will conclude there is a school of Feminine Jazz in the sense that there is a Dixieland or West Coast style. Indeed, the only conclusion that can and should be drawn from these fourteen performances is that the more adroit and inspired of our distaff contributors have done much to enrich the jazz sense, and to impose on it their distinctive and distinguished individual personalities. – Leonard Feather, Author of The Book Of Jazz (Horizon Press)

My Funny Valentine
Taking A Chance On Love
You Took Advantage Of Me
'Tis Autumn
The Lady's In Love With You
Love Of My Life
Autumn In New York
You're The Cream In My Coffee
Surrey With The Fringe On Top
Pagliacci
Opus Z
From This Moment On
In The Purple Grotto
'S Wonderful
Posted by By Mark Betcher at 9:06 PM