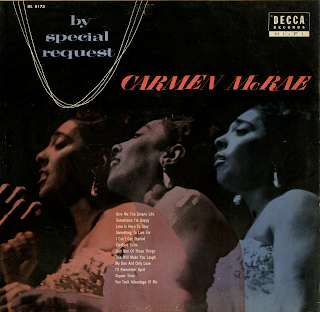 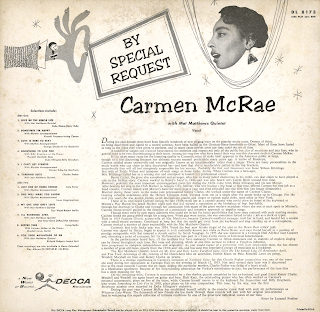 From the back cover: During the past decade there have been hundreds of singing stars on the popular music scene. Dozens of them, on being discovered and signed to record contract, have been hailed as the Greatest-Since-Somebody-or-Other. Most of them have lasted as long as the tunes they were given to perform, and in many cases neither artist nor tune stood the test of time.

A handful of singers can claim to have earned the attention and respect not only of the public but also of musicians and jazz fans, who in general tend to be very discriminating in their tastes. Among the very few who have found their way into this charmed circle is Carmen McRae.

It has taken many years for the haunting quality in Carmen's voice to make itself apparent to the American public at large, though to a few discerning listeners her ultimate success seemed to predictable many years ago. A native of Brooklyn, Carmen studied piano extensively and was originally known as an instrumentalist rather than a singer. There are many personalities in the music world who can claim to have discovered her – and now that she is comfortably settled in the top brackets, undoubtedly they will all feel completely responsible for her success. Probably the first real discoverer was Irene Wilson Kitchings, Mrs. Kitchings hailed her as a coming star and attempted to launch her professional career.

Benny Carter, the great alto saxophonist and arranger, who has so many talent discoveries to his credit, can also claim to have played a role in the McRae story. Carmen worked in Benny's band in 1944 and was also heard with Count Basie around that time. After hearing her sing in the Club Harlem in Atlantic City, Mercer, who was leading a big band at the time, offered Carmen her first job as a band vocalist. Carmen toured with Mercer's band for more than a year and even recorded on side with him (no longer obtainable). Married during those years to the noted jazz percussionist Kenny Clarke, she worked under the name of Carmen Clarke. Gaining valuable experience with the Mercer Ellington band, Carmen went out as a single after the group broke up in Chicago. For the next few years she was known mainly as an intermission pianist and singer at various night clubs, most often in New York.

Those of us who heard Carmen during the late 1940s recall her as a capable pianist who could often be found at the keyboard at Minton's Play House, the noted Harlem night spot that had earned a reputation as the birthplace of bop. Inevitably, through her marriage to Clarke and through her association with many of the great modern musicians whom she met at such spots as Minton's Carmen found herself guided in the direction of a musicianly and inventive approach to popular songs.

Though there were by now many admirers who could see in her the latent possibilities that have since matured with such startling success, Carmen found the going pretty rough for a long time. When gigs were scarce, she was sometimes forced to take a job as a clerk or typist. Then in 1953 Paulette Girard, actress-wife of Mat Matthews, became Carmen's unofficial manager, took her in hand, and landed her a session with a small record company, Convinced at long last that she could get away from the keyboard and sing standing up at a microphone, Carmen worked a number of dates successfully with the Mat Matthews Quintet.

Carmens' first truly lucky year was 1954. Voted the best new female singer of the year in the Down Beat critics' poll, Carmen was signed by Decca, began to appear at such nationally-known jazz clubs as Basin Street, and soon found herself in a position of prestige comparable with that enjoyed a decade earlier by Sarah Vaughan. In 1955 she was featured in a Carnegie Hall All-Star Jazz Concert and, climaxing a series of successes, left for Hollywood to take part in a Tony Curtis movie at Universal International.

In the performances heard here, all the qualities that have endeared Carmen to fellow-musicians and to students of modern singing can be found throughout each tune. Her tone and phrasing, which at one time seems to reflect a Vaughan influence, have progressed to complete independence and originality. As you would expect of a performer with such impeccable taste, she has chosen a number of great old tunes, mostly from the 1930s and '40s, and has used two superlative groups of musicians as a backdrop.

The Mat Matthews Quintet, heard on My One And Only Love, Yardbird Suite, Give Me The Simple Life, I'll Remember April and You Took Advantage Of Me consists of Dutch-born Mat on accordion, Herbie Mann on flute, Mundel Lowe on guitar, Wendell Marshall on bass and Kenny Clarke on drums.

There is a strange significance to Carmen's inclusion of Yardbird Suite, for this Charlie Parker composition was one of the tunes she sang during her appearance at Carnegie Hall on the evening of March, 12, 1955. Not until several days later was it discovered that at the exact moment Carmen was on stage, singing this particular number, Charlie Parker was dying of a heart attack in a Manhattan apartment. Because of her long-standing admiration for Parker's contribution to jazz, her performance of the tune thus has a deep meaning for her.

On the remaining titles, Carmen is accompanied by a fine rhythm quartet assembled by her ex-husband and good friend Kenny Clarke, Mundell and Wendell are again heard on guitar and bass. Dick Katz, the outstanding pianist who has often worked as Carmen's personal accompanist, plays on five of the tunes, while Carmen herself moves in at the keyboard for Suppertime and Billy Strayhorn, who wrote Something To Live For in 1938, plays piano on his own composition. This tune, by the way, was the first Strayhorn number ever recorded by Duke Ellington's orchestra.

During the past year Carmen McRae has established herself solidly in the popular music field with such hit performances as Whatever Lola Wants. The thousands of new friends she has made through those records will join with her original jazz-oriented fans in welcoming this superb collection of intimate renditions by one of the great new individual voices of our time. – Leonard Feather

Give Me The Simple Life
Sometimes I'm Happy
Love Is Here To Stay
Something To Live For
I Can't Get Started
Yardbird Suite
Just One Of Those Things
This Will Make You Laugh
My One And Only Love
I'll Remember April
Supper Time
You Took Advantage Of Me
Posted by By Mark Betcher at 6:34 PM