The Liverpool Songbook - The Londonderry Strings 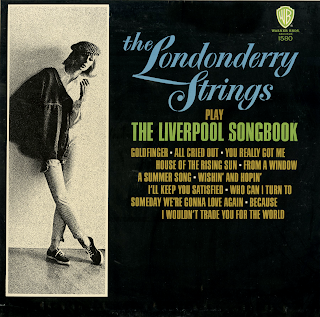 From Billboard - February 13, 1965: Swinging, rocking string arrangements are featured throughout this package of outstanding hit imports from England. The album should prove a winner for the vast number of discotheques. The pacing of the program is set up for just such a purpose. Good listening also.

From A Window
Goldfinger
The House Of The Rising Sun
Someday We're Gonna Love Again
Who Can I Turn To
You Really Got Me
I'll Keep You Satisfied
Because
Wishin' And Hopin'
A Summer Song
I Wouldn't Trade You For The World
All Cried Out
Posted by By Mark Betcher at 6:55 PM