The Girl Most Likely - Jane Powell 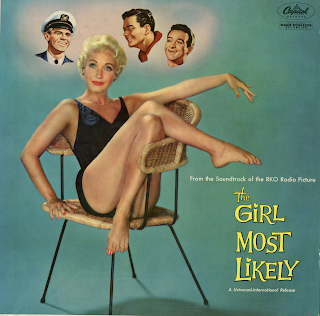 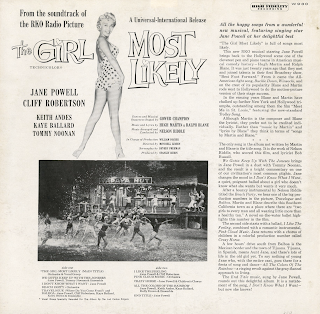 From the back cover: The only song in the album not written by Martin and Blane is the title song. It is the work of Nelson Riddle, who scored the film, and lyricist Bob Russell.

We Gotta Keep Up With The Joneses brings in Jane Powell in a duet with Tommy Noonan, and the result is a bright commentary on one of our civilization's most common plights. Jane changes the mood in I Don't Know What I Want, a quiet, poignant ballad about a girl who doesn't know what she wants but wants it very much.

After a bouncy instrumental by Nelson Riddle titled the Beach Party, we hear one of the big production numbers in the picture, Travelogue and Balboa. Martin and Blane describe this Southern California town as a place where there are "two girls to every man and all wearing little more than a healthy tan." A novel on-the-water ballet highlights this number in the film.

The second side starts with a ballad, I Like The Feeling, combined with a romantic instrumental, Pink Cloud Music. Jane returns with a chorus of children in a colorful production number called Crazy Horse.

A few hours' drive south from Balboa is the Mexican borer and the town of Tijuana. Tijuana in Spanish, means Aunt Jane, and there's lots of life in the old girl yet. To say nothing of young Jane who, with the entire cast, goes there for a fiesta of song and dance – All The Colors Of The Rainbow – a ringing revolt against the gray-fennel approach to living.

The End Title music, sung by Jane Powell, rounds out this delightful album. It is a restatement of the song, I Don't Know What I Want – but now she knows!

The Girl Most Likely (Main Title)
We Gotta Keep Up With The Joneses
I Don't Know What I Want
Beach Party
Balboa
I Like The Feeling
Pink Cloud Music
Crazy Horse
All The Colors Of The Rainbow
End Title
Posted by By Mark Betcher at 7:44 PM