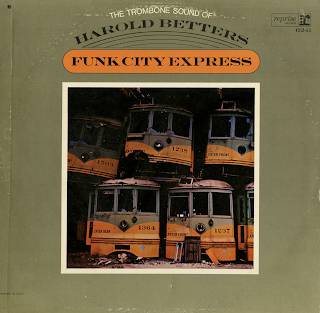 From the back cover: Harold Betters has about as much business playing trombone as Wilt Chamberlain has on a basketball court.

In other words, there is not much better around.

Betters moved out to the West Coast to record this album. Rode out on a trombone called the Funk City Express, and landed up in Hollywood. Spent close to a week locked up in a recording studio. Working days on songs, and nights on rebuilding his muscle fibre. Try out a song for an hour, seeing if it catches fire.

Most of them did.

Betters worked with an all-star assemblage of four sidemen, who usually are four leadermen: Don Randi, who worked on the arrangements as well as maintains a piano that is little short of inspired; Hal Blaine, a quick-witted and classy drummer, doing things on drums that Baby Dodds never dreamed possible; sitting over to the left a bit, the two guitarists, both switched on; to have them together in one studio is enough to make any arranger salivate in envy; their names: Al Casey and Larry Nectal.

But the big man in the center is Betters and his Funk City Express. A driving sound out of Shadyside, which is part of Pittsburgh. A Shadyside sound that's gotten bigger and then again so much more big that today it's the new sound of the trombone.

Funky. A big meaty sound, that few men can blow and make it come out still musical. Betters is pone of the few, probably their leader.

In "Funk City Express," Better has put his high-octane trombone to work on many of the big songs of this generation. Songs which before have sounded sweet as strawberries and cream now come out smellin' like chili beans. And that means plenty of life-givin' bodily juices are a-flow. Which is what separates the Betters from the boys. His ability to take an imitable song and make it inimitable. He does it again and again. "My Blue Heaven"? If that isn't a tired song, what is? Yet with Betters it comes out a kind of Delightful, The kind of Delightful which lifts up your mind and transports it.

It comes: The Funk City Express: ride it. – Stan Cornyn
Hot Tamale Man
Where Are You?
Born Free
The Glory Of Love
This Year
My Blue Heaven
That's Life
Theme To Grace
Sunshine Superman
The Masquerade Is Over
There Goes My Baby
Sweet Sue - Just You
Posted by By Mark Betcher at 6:58 PM