Dance To The Sound Of Claude Thornhill 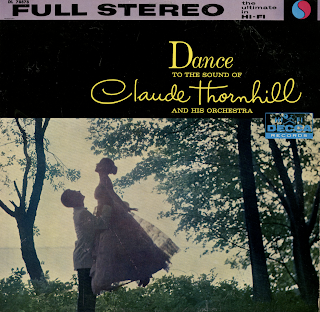 Excerpts from the back cover: Always instantly identifiable and away from the norm, the Thornhill orchestra was first organized in 1940, but the idea for it began to materialize while Claude was staff arranger for Andre Kostelanetz and the Chesterfield radio show in 1937.

"To create something new and arresting, an orchestra different than the others on the scene, was my goal." Thornhill told me. "With Kostelanetz and later when writing for the Skinny Ennis band on the Bob Hope radio series, I experimented and came close to the sound that would eventually become identified with me.

"The more I thought and worked on my ideas the more convinced I became that I had something a little bit different to contribute. What shaped my thinking and the sound of my orchestra to be? I guess it was a combination of experiences in the jazz and pop fields and the extent of my 'legit' musical background." (Ed. note – Curtis Institute and the Cincinnati Conservatory).

Referring back to the Skinny Ennis days, arranger-composer Gil Evans, long an associate of Thornhill's told Nat Hentoff: "Even then, Claude had a unique way with a dance band. He'd use trombones, for example, with woodwinds in a way that gave them a horn sound."

When Claude finally put his first orchestra together in the spring of 1940, and went to work at the Rendezvous Ballroom in Balboa, California, the sound of Thornhill began to develop.

"I wrote 60 arrangements to start with," said Thornhill, "We rehearsed every afternoon rain or shine."

"With the exception of certain places in our arrangements, the orchestra played without vibrato. Vibrato was used to heighten expressiveness. Even before we added French horns to the band, the feeling and sound were there; the trumpets and trombones, often in hats, imitated the sound, and it did it quite well."

Opening for business at Balboa with five brass, six reeds - four saxophones and two clarinets, all the reed men doubled, enabling Claude to obtain a wide range of sounds from this section of the orchestra - and four rhythm, the natural/classical sound of the Thornhill crew impressed dancers and listeners.

Before Thornhill enlisted in the Navy in 1942, he wrote or sketched most of the orchestra's arrangements, was its Chief soloist; the organization centered around him. His solo piano work reflected his feelings for dynamics and provided the motion/contrast to the cloud of sound created by the orchestra. And the sound was of utmost importance to him; the majority of the melodies he selected were "slow-moving" and easily tailored to the sound.

The spring of 1946 found Claude out of the service and reorganizing his orchestra, an orchestra that would make musical history. Evans rejoined Bill Borden, another ex-Thornhill scripted, was rehired; and a young red-haired saxophonist named Gerry Mulligan began writing about a year later.

"The time seemed right for experimentation, though the people around me said that I should stick to romantic, impressionistic music, that extending myself in a new direction was risky.

"I went on experimenting anyway," Claude declared. "A tube was added in 1947, filling out the sound even more. Around this time, Gil started rehearsing three flautists who doubled piccolo at his Manhattan apartment. They were hired.

Though uncompromising to a great extent, the orchestra could not be completely apart. Bread and butter, supplied by the mass dancing and listening public had to be considered; loss of contact, avoided. In addition business conditions were going from bad to worse. By late 1947, it became obvious to Claude that his organization was swimming against the current. The public was lavishing its affections on singers and small bands; interest in dancing was rapidly becoming a thing of the past.

Fran Warren, Thornhill's vocal star, stemmed the tide for a while with her hit records, but it soon became apparent that something had to be done. Late in 1948, Claude dropped a French horn. By the middle of the next year, he had stopped down to basic necessity; the tuba and the flautists had been let go in the economy cut. Only one French horn player was retained. The experimental period in the life of the Thornhill band was over.

The memory of the '46-48 Thornhill aggregation is a warm one for many of us. Its influence has been widespread. "The sound of the Thornhill band became common property pretty fast," says Gill Evans.

The band spoke the language of the modern jazz soloist.

– All comments by Gill Evans... from Down Beat interview with Nat Hentoff