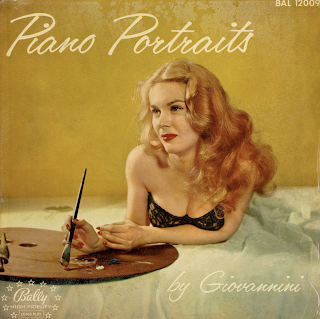 From the back cover: As can be well imagined, by seeing his name, our piano portraitist, Caesar Giovannini, comes from the Latin, too; but he is an American (United States type) by birth – Chicago, Illinois, in 1925.

Now since Caesar means Emperor, and Emperor means "in command," the Caesar Giovannini is aptly named. At the piano, Caesar is in command. You but have to witness the despair and admiration on the faces of other pianists when they watch and listen to him play to know the nature of Caesar' Command of the Piano. His talent as a composer shows through his playing, as does, also, his skill as an orchestrator and an arranger.

Caesar began his musical training at the age of five and his studies were all pointed towards the concert piano field, but in High School he was introduced to popular music. In spite of the criticism frequently directed at our American popular music, much of this music is very good indeed, and surely plays an important role in our lives. To most of us, its call is strong, and Caesar answered this call with never a regret.

During World War II, Caesar was Concert Pianist for the Official U.S. Navy Band in Washington, D.C. and appeared many times with them. In 1947, he received his Bachelors Degree in Piano from the Chicago Conservatory of Music; in 1948, he received his Master's Degree in Composition from this same conservatory.

Caesar joined the Chicago N.B.C. Staff orchestra in 1949 and has been there ever since. During his stay there, he has composed many important works for television and radio shows. He is, at present, writing and conducting the music for the Kukla, Fran and Ollie Show.

Bally Records believes that in offering this album of "Piano Portraits" it is presenting not only on of the great popular pianists of today, but in addition it is giving much more. Most pianists who are recorded use an accompaniment a String Bass and possibly a Guitar; but backing, or rather siding, Caesar Giovannini are five of the finest Jazz performers in America. Vibes – Chuck Calzaretta, Solo Guitar – Claude Scheiner, Rhythm Guitar – Freddy Rundquist, Drums – Max Mariash, and String Bass – Lew Skalinder.

From Billboard - November 17, 1956: Young Giovannini, who writes and conducts the music for the "Kukla, Fran and Ollie" TV show, turns his attention to the package disk field for the first time with this set of 12 moody standards. The artist hews close to the melody line on the tunes, filling them in with easy-to-take full chords. Backing consists of vibes, two guitars, bass and drums which combine to make an agreeable setting. Whether the artists will manage to set the world on fire is a question, but the red-headed lady on the cover, who has little to do with the material, might easily turn the trick.

Early Autumn
Where Or When
I Cover The Waterfront
I'm Through With Love
My Romance
Fools Rush In
Autumn In New York
Stars Fell On Alabama
I See Your Face Before Me
I Didn't Know What Time It Was
The Nearness Of You
Why Shouldn't I
Posted by By Mark Betcher at 2:43 AM