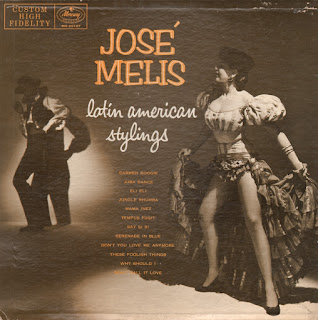 Perhaps the best Melis set that I've collected. Strangely, this varied set contains 5 vocal numbers by a female vocalist who receives no credit on the package. Those tunes help hold your interest as the tracks play through, but Melis solos numbers are better.

From the back cover: A serious artist, inventive jazz man, sensitive composer, and able TV comic, Jose Melis is undoubtedly one of the most versatile pianists on the record scene today. Yet – for all his varied talents – he is still best known for his unique and exciting keyboard approach for Latin American rhythms – a technique which is brilliantly showcased here on 12 familiar pop and Latin standards.

Cuban-born Jose was as authentic infant prodigy. At the age of three he was playing scales, and at six was admitted to the celebrated Havana Conservatory of Music, giving his first public concert the following year. Music literally became his whole life, and a succession of scholarship awards enabled him to study it in its various forms all over the world.

Jose was barely into his teens when the Cuban government awarded him a scholarship to study in Pairs. No sooner had he arrived in France, than he won still another competition, which enabled him to study under the noted French pianist Alfred Cortet. On his return the Havana, Jose did concert work including appearance with the famed Havana Symphony Orchestra.

However he yearned for new musical fields to conquer, and shortly thereafter moved to Boston where he studied under harpsichordist and concert pianist Erwin Bodky. At the end of three years, he won still another scholarship to New York's famed Julliard Graduate School Of Music.

World War II wrought tremendous change in Jose's personal and professional life. As a U.S. Soldier, the serious young classical musician discovered jazz, or rather it discovered him when his fellow G.I.s insisted he adapt his naturally long-hair aptitudes to their juke box-conditioned musical tastes.

It was also while in service that Jose formed the friendship that ultimately brought him his present day success on TV. He and another rookie – Jack Paar, then a comparatively minor comedian became close friends, and, while both were still in uniform, Melis played the organ (Mendelssohn's "Wedding March" – with jazz variations) at Paar's wedding in Hersey, Pa.

Paar was impressed with his buddies talent, and when CBS decided to star him on his own early morning TV show after the war, Jose was the first artist signed for the program.

Carmen Boogie
Juba Dance
Eli, Eli
Jungle Rhumba
Mama Inez
Tempus Fugit
Say Si Si
Serenade In Blue
Don't You Love Me Anymore
These Foolish Things
Why Should I
Don't Call It Love
Posted by By Mark Betcher at 4:10 AM