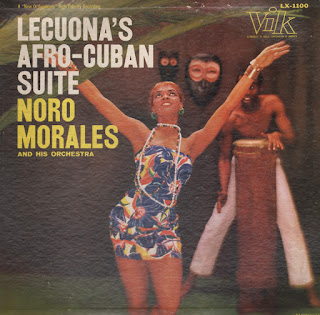 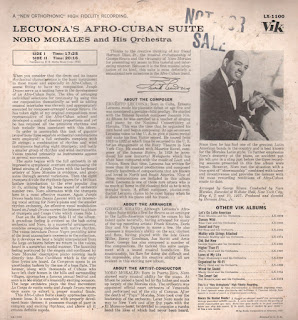 From the back cover: About The Artist-Conductor - Noro Morales: Born in Puerto Rioc, Noro showed early musical ability for the piano. Art fifteen he joined a band led by his father and made up largely of the Morales clan. The orchestra was appointed official court orchestra of Venezuela and performed out of the city of Caracas. After the death of "Papa" Morales, Noro took over the leadership of the orchestra. Later Noro made his way to New York and after five years with the El Morocco-band, he decided to organize a rumba band the likes of which had never been heard. Since then he has had one of the greatest Latin American bands in the country and is best known for the Morales Latin style. To further emphasize Noro's dexterity at the piano, an accident put his left arm in a sling just before the three recording sessions presented in this fine album were begun. However, Noro met the situation with a true spirit of "showmanship" combined with talent and inventiveness and provides the listener with the most rewarding renditions of Afro-Cuban music to date.

About the Arranger - George Siravo: Although Lecuona's Afro-Cuban Suite marks a first for Siravo as an arranger in the Latin-American category he come by his talent quite naturally, having arranged for many of the top recording artists: Frank Sinatra, Doris Day and Vic Damone to name a few. He also possesses a musical ability on the sax, clarinet and flute, having played with the late Glenn Miller, Benny Goodman, Jan Savitt and Artie Shaw. George has also composed a number of fine compositions. He tackled this suite assignment with a sound musical foundation. His musicianship, his flare for doing the difficult and the impossible, plus his creative ability all are evident in this exciting new album.

About the Composer -: Ernesto Lecuona: Born in Cuba, Ernesto Lecuona made his pianistic debut at age five and was considered a genuine child prodigy. He studied with the famous Spanish composer Joaquin Nin. At fifteen he was certified as a teacher of singing and piano by the National Conservatory at Havana. This was the time that he organized his own band and began composing. At age seventeen Lecuona came to the U.S. to give a piano recital and make his first Victor record. He toured from 1919 to 1922 at which time he returned to the U.S. for an engagement at the Roxy Theatre in New York City. He studied with Maurice Ravel, composer of the famous Bolero. In 1928 he introduced his now immortal Malaguena which has often been compared with the music of Liszt and Chopin. Since that time, Lecuona has written for more than 30 musical productions and composed literally hundreds of compositions that are known and loved in North and South America. Nice of those compositions are included in this album suite. Lecuona is one of those rare artists who is a much at home in the classical field as he is with popular music A gifted composer, pianist-conductor Lecuona claims to be most happy when he is alone with his piano and his music.