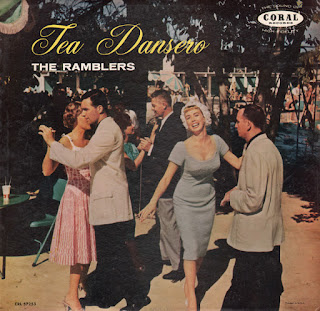 The cover art suggested to me that this album was going to sound like one of the typical period "Parisian-themed" accordion sets I find from time-to-time. On the back cover I noted a number of the tunes featured on the track list that I favor, tunes that are frequently covered by Latin and "exotica" artists of the time. My curiosity level went up and wondered if The Ramblers might sound like The Three Suns. My hopes would not to be dashed when the first track passed by on my turntable. This is a terrific set produced by a trio who, not to take away from The Three Suns who produced fine recordings, sound like a much larger combo. The arrangements create variety and a unique sound that you could identify again if you happened to hear a Rambler's tune playing on your radio. Good stuff!

Bob Bain – Guitar, etc.: In addition to his work as a member of various orchestras, Bob has become well established as conductor, arranger and soloist on a great many recordings. He is frequently heard with the Nelson Riddle orchestra and accompanies many top recording artists. He has several movie credits including "Sing, Boy, Sing," at 20th Century-Fox. His early back-ground include the Tommy Dorsey and Henry James orchestras and the NBC staff orchestra

Frank Flynn – Percussion, etc.: Frank's fine drum and vibraphone work is heard on innumerable recordings, including the Nelson Riddle orchestra and Frank Sinatra. His current TV credits include "Bachelor Father," and "The Ann Southern Show." He has also been staff drummer at CBS.

Ed Carver – Accordion, etc.: A member of the NBC staff orchestra, Ed is currently heard daily on the Curt Massey Show and many other programs. He has done considerable motion picture work and is extremely active as a recording musician.

So it is easy to see why The Ramblers sound very little like a trio. It is almost impossible to listen to this album and visualize it as being performed by three men, even by three musicians as fine as these.