The Best Of Everything - Laurindo Almeida 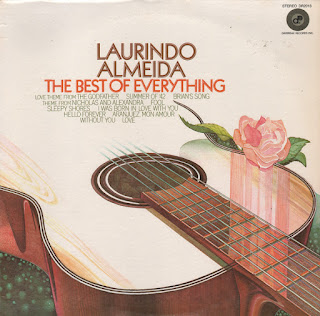 From the back cover: Laurindo Almeida was strumming guitar in the Stan Kenton orchestra in the early 1950s, an immigrant from Brazil, where he was born in Sao Paulo on Sept. 2, 1917. His mother, a concert pianist, started him young, but soon he switched from the piano to his sister's guitar and by the time he was 19, Almedia had played concerts in Sao Paulo and Rio and sailed on the liner Cuba, as a musician, as far as Europe. It was in Paris, in 1936, that he first heard the legendary Django Reinhardt with the Quintet of the Hot Club of France. Django excepted a marked influence on Almeida.

He returned to Brazil for ten years, learned arranging and composing and, in 1947, undertook the big leap north to Hollywood. Laurindo was hardly an overnight sensation. He scuffled.

"I had a strong interest in jazz," Almedia recalls, "and so I went to Stan Kenton. He gave me the big break, even commissioned Peter Rugolo to write some special original charts built around my guitar. I'll forever be grateful.

Eventually, as it must to all gifted men, the collaboration ended and Almedia went out on his own. He concentrated on recording, mainly for Capitol, and his renown as a concert soloist spread throughout   the post-war world. Almeida composed and arranged and played, and he traveled extensively as well. Two epochal recordings by Brazilian composers were made: the Villa-Lobos Guitar Concerto and Radomes Cnatalli's Concerto do Copacabana, discs which are still regarded as definitive.

Laurindo Almeida today lives in the Los Angeles suburb of Sherman Oaks, a naturalized American for many years, a teacher of guitar, a gardener, a collector of stringed instruments and fine wines and a health nut – he swims every day of the year just as he did as a boy in Sao Paulo. A Virgo, he takes things as they come, with grace and tolerance.

He has toured and recorded with the Modern Jazz Quartet in recent years simply because he still loves jazz. "But then," he shrugs, "I like concert work and pop music, too. There is beauty in all music."

The supporting sessions guitar player gives the 70s effects pedal a workout on this set. Almeida manages to take that over-used effect in stride and effortlessly blends his clean, classic sound into the mix. As always, Almeida understands how to make his "style" or "sound" work inside of any project concept handed to him. Good stuff!

Love Theme From The Godfather
Aranjuez, Mon Amour
Fool
Sleepy Shores
Theme From Nicholas And Alexandra
Without You
I Was born In Love With You
Summer Of '42
Hello Forever
Brian's Song
Love
Posted by By Mark Betcher at 3:02 PM