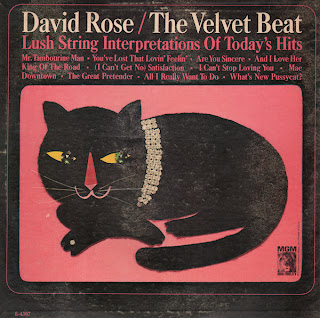 From the back cover: Ask any alert schoolgirl to identify the numbers in this album and you'll begin to get the idea behind it. In simple fact, the music that David Rose has chosen to interpret is the music of our young generation.

It is no longer even generically accurate to term the music of the young "rock and roll," though most youngsters do. To them it is of no real importance what their music is called; it just better be played the way they like to hear it.

In acting on producer Jesse Kaye's conception of this album, David Rose in a way was taking the tiger by the tail. If he undertook to record rock 'n roll tunes, would he possibly alienate his adult audience of millions who have identified him with Holiday For Strings and its many successors over the years? On the other side, would he reach the millions of kids who identify their music with the Beatles, the Rolling Stones, Sonny & Cher and the rest?

Satisfaction
King Of The Road
Mr. Tambourine Man
You've Lost That Lovin' Feeling
I Can't Stop Loving You
All I Really Want To Do
What's New Pussycat
Are You Sincere
Downtown
The Great Pretender
Mae
And I Love Her
Posted by By Mark Betcher at 5:22 PM