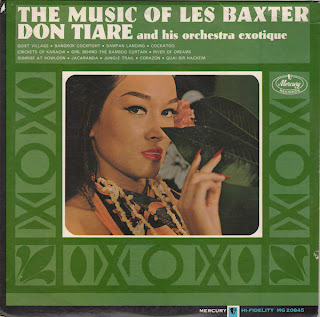 From the back cover: Don Tiare is an international performer whose expressive combo is an familiar in Bangkok as in Bordeaux, as comfortable in Nikko as in Nice, and as suited to the dinner jacket of the London Savoy as to the pareu on the beaches of Tahiti. Long an admirer of the unique Les Baxter creations, he asked the composer to write some original pieces for this album; and those, along with such Baxter standards as Quite Village, Bangkok Cockfight and Crickets Of Karachi, make up a dazzling and somewhat intoxicating tour of the far away places.

If I could tell, from the cover notes, which tunes Baxter apparently wrote for this LP I would post one as a sample.

Quite Village kicks off the album and sounds good, but the vibe is very close to close to Baxter's version. Soon the album takes on a more personal sound that, I assume, reflects Tiare who must play piano on the album(?). I can't find any real info on the man. But the piano seems to be the featured instrument whose sound rings in a strong shimmering fashion over the other instruments. Some of the tunes are pretty jazzy.

The engineering is excellent featuring a rich low end. A terrific listen over all.