It Hurts To Say Goodbye - The Jack Gold Orchestra and Chorus 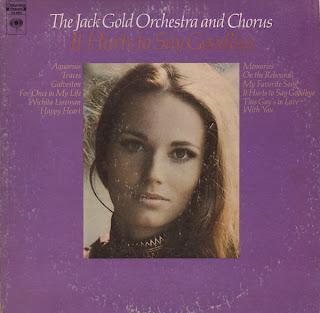 Jack Gold was a song writer, music publisher and record producer. He worked with the likes of Ray Conniff, Patty Duke, Percy Faith, Bobby Goldsboro, Jim Nabors, Barbra Streisand and Margaret Whiting. This was his first (and maybe only) album. Columbia did try and promote the LP, running a large ad in Billboard.

If you like cheesy 60s light pop then you find enough here to hold your interested. I still recommend Ray Bloch for the ultimate fix.
Posted by By Mark Betcher at 8:41 AM