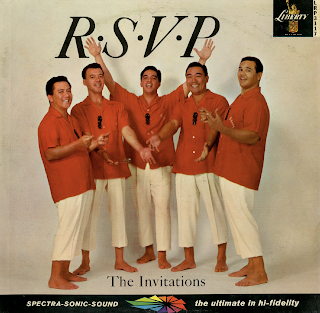 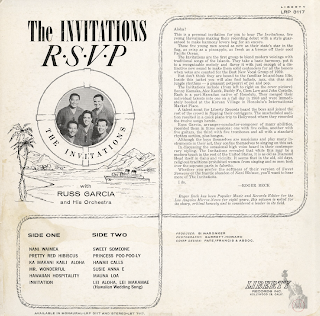 From the back cover: The Invitations include (from left to right on the cover picture) Sonny Kamaka, Alec Kaeck, Buddy Fo, Clem Low and John Costello. Each is a part-Hawaiian native of Honolulu. They merged their individual talents into one on a fall day in 1958 and were immediately booked at the Korean Village in Honolulu's International Market Place.

A talent scout for Liberty Records heard the boys and joined the rest of the crowd in flipping their outriggers. The unscheduled audition resulted in a quick plane trip to Hollywood where they recorded the twelve songs herein.

Russ Garcia, arranger-conductor-composer of many abilities, recorded them in three sessions: one with five cellos, another with five guitars, the third with five trombones and all with a standard rhythm section, plus bongos.

Although the boys themselves are musicians and play many instruments in their act, they confine themselves to singing on this set.

In discussing the occasional high voice heard in their contemporary styling, The Invitations revealed that while this may be a modern touch in the rest of the United States, it is as old as Diamond Head itself in Oahu and vicinity. It seems that in the old, old days, religious traditions prohibited women from singing and so men took over the soprano parts in falsetto. – Roger Beck