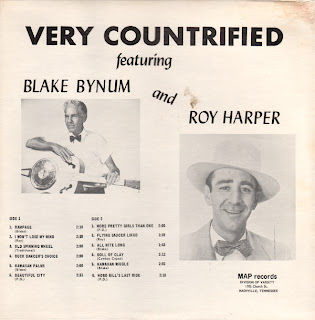 From the back cover: Roy Harper joined Bynum's Sand Mountain Boys in 1948. Roy, not unlike the late famous Jimmy Rodgers, was formerly a railroad brakeman for several railroad companies throughout the South and Southwest. Also: He (Bynum) is semi-retired and lives with his family in Cleveland, Tennessee.

The album was apparently released on the coattails of several 45s that were successful for MAP.
Posted by By Mark Betcher at 2:18 PM