A Musical Essay On Dixieland Jazz - With The Eight Balls 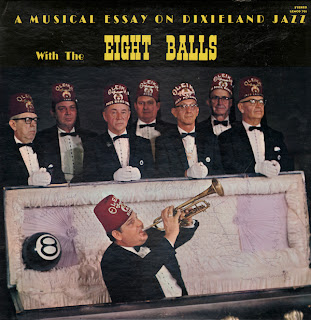 A Musical Essay On Dixieland Jazz

With The Oleika Eight Balls
Lemco 701

A recording celebrating the roots of Jazz (Funeral Music). Each track gets a brief introduction.

The record features a terrific cover signed by all the members of the Eight Balls!

From the back cover: The Eight Balls formed as a specialty Dixieland group in 1957, and, as all are active members of the Brass Band, they are not recognized as an official unit of Oleika Temple (Lexington, Kentucky). The group is completely self supporting and, as unofficial Goodwill Ambassadors of Oleika, play only for Shrine and Masonic functions.

Members of the group have been honored by a number of special awards, including being commissioned as Kentucky Colonels by the Governor Of Kentucky; receiving the Order of the Braying Burro from Past Imperial Potentate Barney Collins; being appointed, in Spring 1970, Honorary Mayors of the City of Bessemer, Ala., by Past Potentate Jess Lanier, Zamora Temple, the official Mayor.