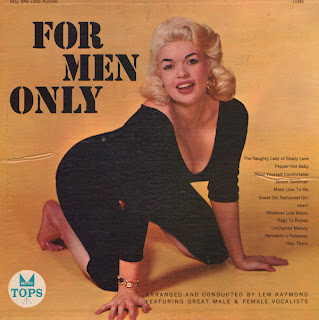 Jane Mansfield cover. Mansfield won a Golden Globe in 1957 for New Star Of The Year – Actress beating Carroll Baker and Natalie Wood. In 1959 her mainstream film roles had dried up but she continued to make low-budget films and stay in the public eye until her death in a car accident in 1967.

The record, of course, isn't"naughty". This is pop recording featuring decent unnamed studio vocalists.
Posted by By Mark Betcher at 4:18 AM