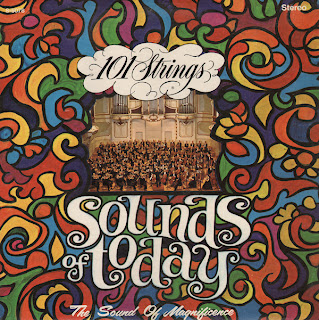 From the back cover: Played by the world's largest orchestra hit songs from the era of soul, psychedelia and the new generation – over 130 players "turned on" with the songs and sounds of today – the most astounding "trip" ever to be taped.

101's Astro-Sounds may be 101's most astounding "trip", but this LP comes in a close second. This is a great light pop album with a fun psych edge.

Monty Kelly is credited for the arrangements, and if I'm reading the song credits correctly he wrote four of the tunes (Stone Baroque, Karma Sitar, Blues For The Guru and Strings For Ravi).
Posted by By Mark Betcher at 12:56 PM