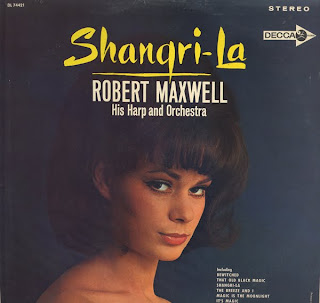 From the back cover: Robert Maxwell, known as "America's Foremost Harpist" is credited with introducing the instrumental to the world of popular music. Previously the harp was relegated to the symphonic rule of playing alongside the triangle or cymbal player.

Maxwell composed Shangri-La which was "the Jackie Gleason theme song of many years".

The LP is inventive, cool and covers a number of tunes that are exotica standards.
Posted by By Mark Betcher at 6:26 AM