In A Mellow Mood - Bobby Hacket 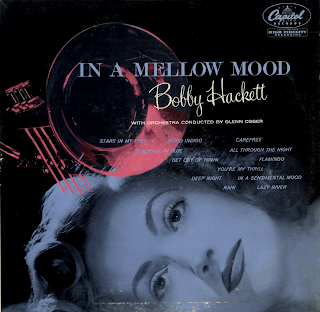 From the back cover: Bobby Hackett, spent the first twenty years of his life growing up and learning to play the trumpet. The next twenty years was a quiet period during which he became – quite simply – one of the finest soloists in popular music. Although relatively unknown to the general public, Hackett built a reputation in the trade. Playing with Horace Heidt, Glenn Miller, Glen Gray, and Paul Whiteman, he became recognized as a "musician's musician," one who played "all the pretty notes." He was the man behind some of the loveliest choruses on record, notably his now-classic version of Embraceable You. Lately, Hackett has gained wider recognition, his featured trumpet work on the popular Jackie Gleason albums lifting him into higher echelons of recording artists. He is now a man in demand. And to satisfy that demand, Capitol happily offers this new album of Bobby Hackett "In A Mellow Mood."

From Billboard - August 13, 1955: Bobby Hackett, the fine jazz trumpeter, featured heavily in the Jackie Gleason mood albums, has this show all to himself. It's still mood music, tho the trumpeter is allowed more freedom to improvise, utilizing a batch of pretty standards. Hackett has managed to fine a few items off the well-trodden track. Relaxing listenable stuff for the mood music buyer with a jaded pallet.

Serenade In Blue
Deep Night
In A Sentimental Mood
Lazy River
Carefree
Mood Indigo
Get Out Of Town
All Through The Night
Stars In My Eyes
Rain
Flamingo
You're My Thrill
Posted by By Mark Betcher at 3:30 PM