Singin' For Fun - The Krater Brothers 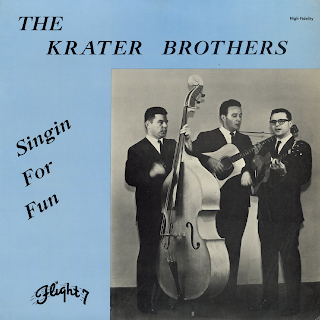 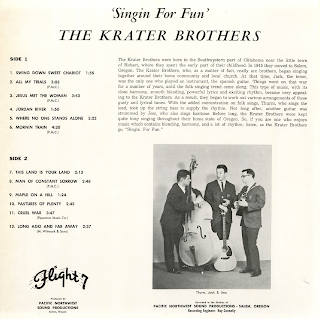 From the back cover: The Krafter Brothers were born in the Southwestern part of Oklahoma near the little town of Hobart, where they spent the early part of their childhood. In 1945 they moved to Salem, Oregon. The Krafter Brothers, who, as a matter of fact, really are brothers, began singing together around their home community and local church. At that time, Jack, the tenor, was the only one who played any instrument, the Spanish Guitar. Things went on that way for a number of years, until the folk singing trend came along. This type of music, with its close harmony, smooth blending, powerful lyrics and exciting rhythm, became very appealing to the Krafter Brothers. As a result, they began to work out various arrangements of those gutsy and lyrical tunes. With the added concentration on folk songs, Thurm, who sings the lead, took up the string bass to supply the rhythm. Not long after, another guitar was strummed bu Jess, who also sings baritone. Before long, the Krater Brothers were kept quite busy singing throughout their home state of Oregon. So, if you are one who enjoys music which contains blending, harmony, and a lot of rhythm; listen, as the Krater Brothers go, "Singin' For Fun."

Swing Down Sweet Chariot
All My Trials
Jesus Met The Woman
Jordan River
Where No One Stands Alone
Mornin' Train
This Land Is Your Land
Man Of Constant Sorrow
Maple On A Hill
Pastures Of Plenty
Cruel War
Long Ago And Far Away
Posted by By Mark Betcher at 6:10 PM