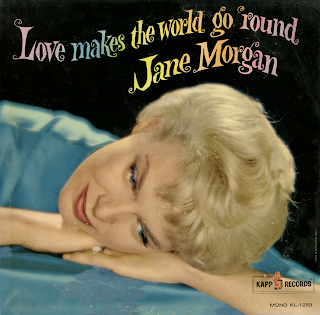 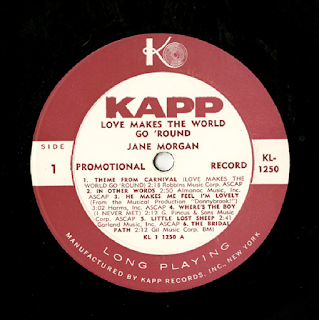 From the back cover: This lovely star of records, radio, television and the theatre was born in New England. Her original ambition was to be a lyric soprano, and she studied at New York's famed Juilliard School Of Music, working as a band vocalist in the evenings to earn her tuition fees. However, her success as a vocalist changed her career, when a French impresario signed her to star in the renowned Club des Champs Elysees in Paris. Her fame spread internationally as she toured Europe and, within a short time, America club-owners were clamoring for "The American Girl From Paris." Since her return, her success has been as phenomenal on this side of the Atlantic as it was in Europe, and she has appeared in every major hotel and supper club in the United States and Canada, also starring in Summer theatre roles during the holiday season. "The Fascination Girl" is in constant demand on television, a regular "favorite" of the Ed Sullivan and Perry Como Shows and a special guest of every coast-to-coast variety program. Her 'single' records feature steadily on the popularity charts, and her many albums for the Kapp label are an important ingredient of any record collection containing the best in popular music.

From Billboard - August 21, 1961: Miss Morgan has another first-rate, beautifully performed LP to be added to her fans' collections. The set is chock full of the fine vocal numbers, most of them in the ballad vein, and a good number of them from last season's musical fare on Broadway. A number of them, like the title tune from "Carnival," also have been issued as singles. On most of the sides the orchestra is directed by Jack Elliott. Among some titles are "In Other Words," "Where's The Boy," "Temptation" and "Homesick For New England."

Theme From "Carnival" (Love Makes The World Go 'Round)
In Other Words
He Makes Me Feel I'm Lovely (From the musical production "Donnybrook!")
Where's The Boy (I Never Met)
Little Lost Sheep
**The Bridal Path
Temptation
My Love Is A Wanderer
Homesick For New England
More Than I Should
*Incurably Romantic
Count Every Star
Posted by By Mark Betcher at 8:17 PM