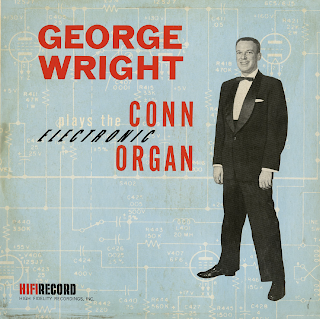 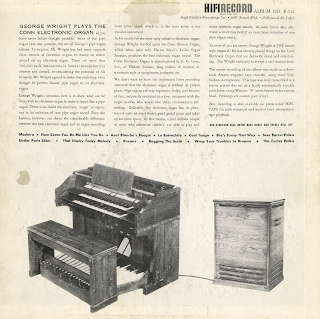 From the back cover: George Wright plays the Conn Electronic Organ as you have never before thought possible. Some of you pipe organ fans may question this use of George' pipe organ talents. To explain, Mr. Wright has had many requests from owners of electronic organs to record an album played on an electronic organ. There are more than 500,000 such instruments in homes throughout this country and abroad, so considering the potential of his listeners, Mr. Wright agreed to make this recording, even though he prefers theater pipe organ to an electronic organ.

George Wright's intention here is to show what can be done with an electronic organ to make it sound like a pipe organ. There is no doubt the electronic "organ" is ingenious in its imitation of true pipe organ sound. Even the layman, however, can detect the considerable difference between the best electronic organ and an organ sounding from actual pipes, which is, in the strict sense, a true musical instrument.

In his search for the most truly imitative electronic organ George Wright decided upon the Conn Electric Organ, which when used with Electro Music's Leslie Organ Speaker, produces the best electronic organ sound. The Conn Electronic Organ is manufactured by C. G. Conn, Ltd., of Elkhart, Indiana, long makers of musical instruments such as saxophones, trumpets, etc.

We don't want to leave the impression from preceding comment that the electronic organ is without its proper place. Pipe organs are very expensive, bulky, and because of this, necessarily restrict to a few, compared with the larger number who would own them, circumstances permitting. Definitely, the electronic organ has its place, since it cost on more than a good grand piano and takes up no more space. By this means, a half million people or more who otherwise couldn't, are able to play and make synthetic organ sounds. At some future date, electronic science may perfect an even closer imitation of true pipe organ sound.

As most of you are aware, George Wright is THE theater style organist. He has cleverly played things on the Conn Electronic Organ that are distinctly novel and entertaining. The Wright virtuosity is always a real musical treat.

The master recording of this album was made on a three-track Ampex magnetic tape recorder, using three Telefunken microphones. This tape was later transcribed to a master acetate disc cut on a Scully automatically variable pitch lathe, using Western "B" series heated stylus cutting head. Pressings are custom pure Vinyl.
From Billboard - December 29, 1956: Largely responsible for the resurgence of organ album popularity, this set by George Wright is an experiment in duplicating a theater pipe organ sound on a Conn electric organ. As such, the package comes off rather well on basis of Wright's ability to mold his style to the material at hand. Latter consists of standards, "Beer Barrel Polka," "Under Paris Skies," etc. With more home organs being sold today than pianos, the package should prove to be a potent seller.

Madera
How Come You Do Me Like You Do
Aunt Blanche's Boogie
La Barrachita
Cool Tango
She's Funny That Way
Beer Barrel Polka
Under Paris Skies
That's Honky Tony Melody
Pavane
Ragging The Scale
Wrap Your Troubles In Dreams
The Cactus Polka
Posted by By Mark Betcher at 7:40 PM