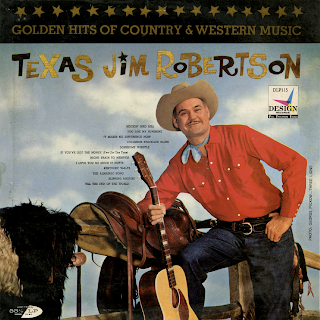 From the back cover: Let's examine this 6 foot 3 inch baritone. Born in 1916 on his folk's ranch in Batesville, Texas, he was christened James Battle Robertson. Instead of a crib he used a saddle. Tex claims he learned to ride a horse before he knew how to walk.

He was such a big boy for his age that his dad put him on as a top-hand for the summer of his eleventh birthday. That's an awful lot of riding and roping for a boy that age. No trouble for Tex, he took it all in his long steady stride.

When Tex turned 16, he went to visit an aunt in Bat Cave, North Carolina. There was so much fun to be had that he had it all and that included spending the money Tex had put aside to get back to Texas. Needing money for that return trip, he looked around. No one required a cowboy on their tobacco farm. There just wasn't any rodeos he could enter where he might win his passage home. The want ads weren't enticing but he kept on looking till one day a Goldsboro paper ran the following ad. "Wanted – guitar playing cowboy singer – must be authentic and sing songs of the west. Knowledge of radio technique helpful but not necessary for the right man." The address was a radio station in Charlotte, North Carolina.

Well, part of Jim's training included playing the guitar, banjo and mandolin. His dad taught him all that plus the kind of songs every cowboy had to know. Tex visited with the Program Director of the radio station in Charlotte. He never calls on anyone, he always visits with people. Jim started work the next day. The radio audience loved him. NBC heard of this love and brought into New York for his first network show when he remained. Then, he became an actor... remember the deep low male voice on "Lone Journey," "Against The Storm," "Death Valley Days" and the villain on "Dick Tracy," they were great radio serials. The year was 1937, he was popular, successful and in love – her name was Marianne. The year is 1959, he is still popular, successful and in love and she's still the same Marianne he married in 1937. Finally, World War II, the Marine Corps and the South Pacific, the area not the musical.

Back home again, the American public did not forget a great talent.

Slipping Around
Lonesome Whistle
Kentucky Waltz
You Are My Sunshine
I Love You So Much It Hurts
It Makes No Difference Now
If You've Got The Money
Till The End Of The World
Night Train To Memphis
Mockin' Bird Hill
The Almanac Song
Columbus Stockade Blues
Posted by By Mark Betcher at 4:15 PM