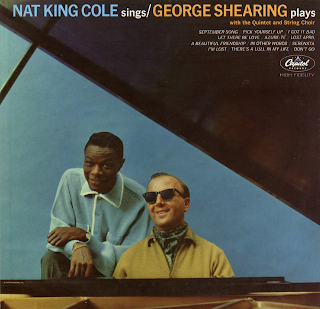 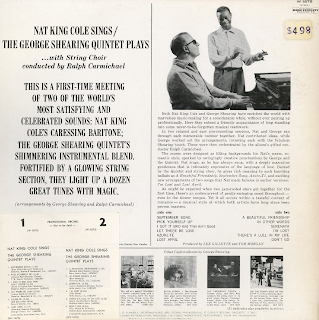 From the back cover: Both Nat King Cole and George Shearing have enriched the world with marvelous music-making for a considerable while, without ever pairing up professionally. Here they extend a friendly acquaintance of long standing into some never-to-be-forgotten musical teamwork.

In two relaxed and easy pre-recording sessions, Nat and George ran through each memorable number together. Nat contributed ideas, while George worked out the arrangements, investing each with the fabulous Shearing touch. These were then orchestrated by the album's gifted conductor Ralph Carmichael.

The scores were designed lilting backgrounds for Nat's warm, romantic style, sparked by swingingly creative punctuations by George and the Quintet. Nat sings, as he has always sung, with a deeply masculine gentleness that is intimately expressive of the language of love. Backed by the Quintet and string choir, he gives rich meaning to such haunting ballads as A Beautiful Friendship, September Song, Azure-Te, and exciting new arrangements of two songs that Nat made famous in earlier version; I'm Lost and Lost April.

As might be expected when two jazz-rooted stars get together for the first time, there's an undercurrent of gently-swinging mood throughout – even in the slower tempos. Yet it all occurs within a tasteful context of romance – a musical style at which both artists have long since been proven masters.

From Billboard - March 17, 1962: This pairing seems almost a natural for heavy action, radio and store-wise alike. Cole warbles in his usual polished, professional manner against Shearing's fine, often gospel-styled piano here, all of it augmented neatly by a choir of strings, "September Song," "A Beautiful Friendship" (once recorded by Ella Fitzgerald) and "I Got It Bad" are among the tracks of Cole and another six by Shearing, from earlier albums by each, which should assure success.

September Song
Pick Yourself Up
I Got It Bad And That Ain't Good
Let Her Be Love
Azure-Te
Lost April
A Beautiful Friendship
In Other Words
Serenata
I'm Lost
There's A Lull In My Life
Don't Go
Posted by By Mark Betcher at 5:51 PM