For The First Time - Brenda and Pete 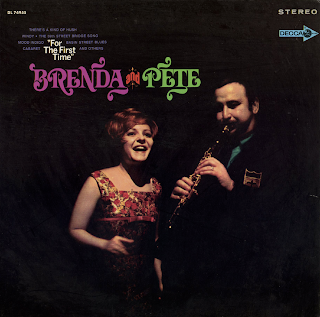 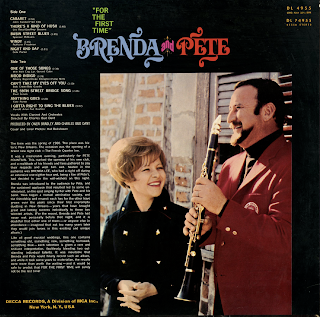 From the back cover: The time was the spring of 1960, The place was historic New Orleans. The occasion was the opening of a brand new night club – The French Quarter Inn.

It was a memorable evening, particularly for Pete Fountain. This marked the opening of his own club, and a multitude of his friends and fans gathered to pay their respects and wish him sell. Seated in the audience was Brenda Lee, who had a night off during an extensive one-nighter tour and, being a fan of Pete's had decided to join the well-wishers on this night.

Brenda was introduced to the audience by Pete, and the sustained applause that resulted led to some unrehearsed, on-the-spot singing by her with Pete and his band. Thus began a mutual admiration society, and the friendship and respect each has for the other have grown over the years since their first impromptu duetting in New Orleans – years that have brought great and lasting success individually to these two talented artists. (For the record, Brenda and Pete had never met met personally before that night, and it is doubtful that either of them – or anyone else in attendance – imagined that not too many years later they would join forces in this exciting and unique album.)

From Billboard - March 28, 1968: Brenda Lee and Pete Fountain apparently were made for each other. In this "first time" paring, Miss Lee's singing and Fountain's clarineting complement each other splendidly. The rhythm numbers have an easygoing catchy flow while the blues ballads get a dramatic musical punch. "Cabaret" and "Basin Street Blues" are excellent samples of their wide range.

Cabaret
There's A Kind Of Hush
Basin Street Blues
Windy
Night And Day
One Of Those Songs
Mood Indigo
Can't Take My Eyes Off You
The 59th Street Bridge Song
Anything Goes
I Gotta Right To Sing The Blues
Posted by By Mark Betcher at 7:02 PM