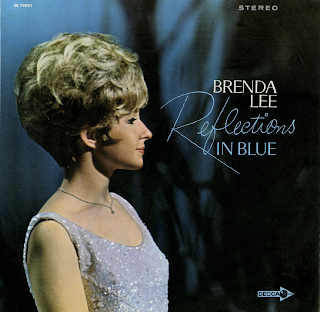 From the back cover: For over fifteen years, Brenda Lee has been a professional entertainer. For eleven of those years, she has been a recording artist for Decca Records. These facts might normally be considered as trivial, were it not for her youthful twenty-three years of age. During her career on records, Brenda has amassed more than a score of best-selling singles and albums, three of which garnered gold records for her because of sales of more than one million copies, each.

She has appeared in concert halls, and night clubs all over America, including New York's famed Copacabana, Blinstrub's in Boston, Hollywood's renowned Cocoanut Grove, the Fairmount Hotel in Miami Beach, the Sahara Hotel in Las Vegas, the Jersey, just to name some of the best-known entertainment meccas. She has also appeared in Europe, Australia, the Far East and in Latin America. Many of these clubs have been the scene of repeated triumphs for Brenda, after her initial appearance in them established her as a star of great magnitude.

Like vintage wine, Brenda Lee has matured and mellowed with age, if such a cliche' can be accorded this young and talented performer. But the fact of the matter is that she has matured and mellowed, as this album will plainly attest. Here is a side of Brenda that many of her record fans may not be familiar with – poignant, plaintive, provocative – songs that have become memorable standards in popular music, accompanied by full and effective orchestration, including a string section featuring sixteen violins.

From Billboard - October 28, 1967: Brenda Lee's blues ballad mood is a highly attractive one. She sets up a gripping mood with a belting style that gets right to the heart of the matter. "Am I Blue," "Little Girl Blue," and the more current "I Will Wait For You" are some of the tunes that will help draw lots of spins and sales her way.

Here's That Rainy Day
You'll Never Know
Baby, Won't You Please Come Home
I'll Only Miss Him When I Think Of Him
Am I Blue
If I Had You
Little Girl Blue
I Will Wait For You
Posted by By Mark Betcher at 9:13 PM