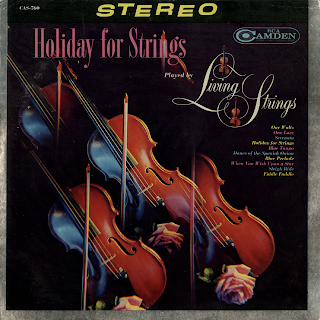 From the back cover: In effect, this album is a salute to David Rose and Leroy Anderson, two composers, arrangers and conductors who have influenced a whole style of popular music. Both are big-band specialists, writing lovely, sweeping mood melodies or intriguing novelties that make full use of massed strings, whole brass choirs – instrumentation in the largest sense.

This is music which precisely and beautifully fits the style of the famed Living Strings – and consequently the Strings have never been better than in the thrilling performances in theses grooves. Eight of the album's ten songs are Rose or Anderson originals.

The opener and our title song, Holiday For Strings by David Rose and Sam Gallop, was an instant hit in 1943. In many ways, it inaugurated a whole era and influenced a generation of arrangers and conductors.

Three other Rose originals, reflecting changing musical moods, are excitingly explored by the Living Strings. In Dance Of The Spanish Onion the familiar "lush" middle theme has been lengthened in this album, brightening the effect of this lovely music. The Strings then turn lush and romantic for the tender Our Waltz, written in 1943 by Rose with Nat Burton, and the lovely One Love, a 1946 composition with words by Leo Robin.

Among the four Leroy Anderson originals in Blue Tango, here given a gentle swing treatment. Popular music fans will remember the song as a big single-record hit as performed by Hugo Winterhalter and his orchestra in the early Fifties. It was written in 1952 with a Mitchel Parish (Stardust) lyric.

Serenata, written by Anderson in 1949 with a lyric by Mitchell Parish is intriguingly arranged here as a Bossa Nova. Sleigh Ride, another Anderson-Parish collaboration (1950) is vigorously updated in Twist rhythm.

Movie fans will recognize one of our selections as a two-way hit. When You Wish Upon A Star, a 1940 hit written by Ned Washington and Leigh Harline, was later the highly popular theme of Walt Disney's "Pinocchio," for which it received an Academy Award.

Our Love
Serenata
When You Wish Upon A Star
Dance Of The Spanish Onion
Our Waltz
Fiddle Fiddle
Blue Prelude
Sleigh Ride
Blue Tango
Posted by By Mark Betcher at 5:45 PM