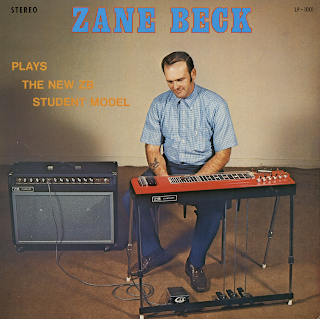 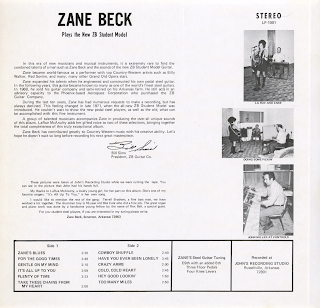 From the back cover: Zane became world famous as a performer with top Country-Western artists such as Billy Walker, Red Sovine, and many, many other Grand Old Opera stars.

Zane expanded his talents when he engineered and constructed his own pedal steel guitar. In the following years, this guitar became known to many as one of the world's finest steel guitars. In 1968, he sold his guitar company and semi-retired on his Arkansas farm. He still acts in an advisory capacity to the Phoenix-based Aerospace Corporation who purchased the ZB Guitar Company.

During the last ten years, Zane has had numerous requests to make a recording but has always declined. This feeling changed in late 1971, when the all-new ZB Student Model was introduced. He couldn't wait to show the new pedal steel players, as well as the old, what can be accomplished with this fine instrument. – Bill Sims - President, ZB Guitar Co.

Zane's Blues
For The Good Times
Gentle On My Mind
It's All Up To You
Plenty Of Time
Take These Chains From My Heart
Cowboy Shuffle
Have You Ever Been Lonely
Crazy Arms
Cold, Cold Heart
Hey Good Lookin'
Too Many Miles
Posted by By Mark Betcher at 3:35 AM